Check out our extensive bibliography of Digital Art

For Ellen Pearlman, dichotomy is a centrally recurrent motif. Across her oeuvre as artist, curator, director, and scholar, Pearlman makes visible the aesthetic and innovative qualities in digital technology (e.g. cybernetics and telematics), while at the same time also their destructivity (regarding issues of public surveillance, environmental pollution, and government control). In Pearlman’s performances, she combines dance with image and sound in data visualisations, translating bodily movement and experience into their technological correspondents and opposites.

Ellen Pearlman is co-founder of several media art research projects and artist residency programmes, including Art-A-Hack and ThoughtWorks Arts Residency. Based in New York, she achieved her PhD at Hong Kong City University, which was awarded Highest Honors globally in Leonardo LABS Abstracts in 2018. Lecturing all over the world, including at the first collaborative laboratory on cyborg art at Parsons/The New School, Pearlman’s telematic and interactive video performances have been shown at major media art festivals such as Microwave Festival, SIGGRAPH, ISEA, RIXC Festival. 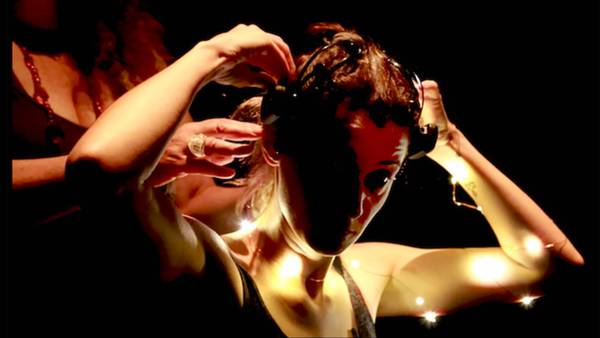 Explore here: Ellen Pearlman’s work on her artist profile on the Archive of Digital Art

Pearlman’s media artworks address issues of human communication and connection through performative explorations and telematics methods, with influences from Asian culture, Buddhist and Zen thought. During her PhD research at the School of Creative Media (City U, HK), Pearlman developed Noor: A Brain Opera (2016). Within a fully immersive 360-degree environment, a performer moved through the audience wearing a wireless EEG headset, her brainwaves displayed on screen, and changing in accordance to her mood and in response to the audience. The performance discussed the hazards and hopes for cybernetic innovation, while raising the question: “is there a place in human consciousness where surveillance cannot go?”

In the video dialogue Surveillance Siddhi (2014), Pearlman searched for the meaning of being human in terms of privacy, individuality, authority, and the state. Using robotized voices, and enhanced visual processing developed by MIT’s CSAIL Lab, Pearlman created digital imagery as poetic as it was disturbing.

BOOKS & QUOTES
In her extensive writings as book author and art journalist, Ellen Pearlman explores the histories and intersections between religion, Buddhism, dance, performativity, and modern technology. Her book Nothing and Everything: The Influence of Buddhism on the American Avantgarde (2012) drew a comparison between the art scene in America during the late 1950s to early 1960s and Zen Buddhism’s emphasis on “enlightenment at any moment” and “living in the now”.
“Zen thinking permeates Western arts: the mid-century pivot to Eastern influence is a truism of previous generations, but curiously absent from contemporary mastications of history. Ellen Pearlman gets it all right: Nothing and Everything is the perfectly balanced lesson—art, and change, and friendship” wrote John Reed, novelist and book editor of The Brooklyn Rail, on Nothing and Everything.

ELLEN PEARLMAN & MEDIA ART HISTORIES
Browse through the Media Art Research Thesaurus and search for Keywords related to Pearlmanʼs work in order to find visual comparisons and conceptual bridges with the Graphic Print Collection of the Göttweig Collection.