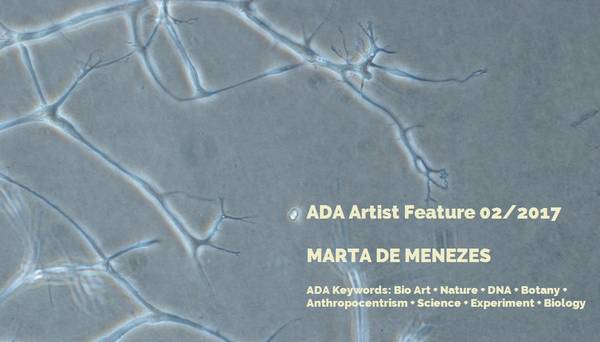 Marta de Menezes is an artist, writer and curator, who has worked in the field of Bio Art since the late Nineties. She is the director of the experimental art laboratory Ectopia, which aims to promote collaborative projects at the intersection of art and biology, and also received several artist-in-residency programs at laboratories herself.

Many of her art works such as Nature? (2000), which resulted from her residency at Leiden University, can be considered pioneering for Bio Art. De Menezes manipulated the wing patterns of live butterflies to create a design unprecedented in nature.

Prof. Dr. Gunalan NADARAJAN (Ann Arbor) on Nature? : "Her work enacts a complication of the natural and the artificial through the parergonality of her manipulations, which simultaneously mimic and deviate from natural patterns."

Browse through the Media Art Research Thesaurus and search for Keywords related to Menezes' work in order to find visual comparison and conceptual bridges with the Graphic Print Collection of the Goettweig Collection. 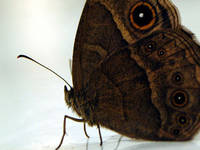 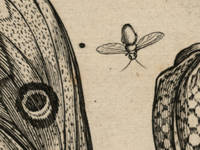 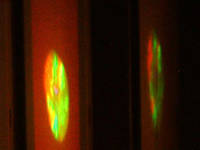 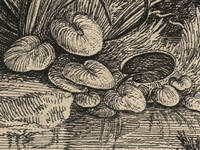 <h2>Menezes' artworks address the anthropocentric (human-centred) view on animals and nature, and question human intervention into biological processes such as gene manipulation.</h2>

On the Media Art Research Thesaurus, her work can be analysed comparatively to art historical objects and their portrayals of biology and botany such as the “Archetypa studiaque patris Georgii Hoefnagelii” by Flemish painter and printmaker Jacob Hoefnagel.

In 1592, Hoefnagel published a collection of 48 copper engravings based on his father’s studies. The graphics portray detailed and illusionistic studies of animals, insects and plants, which were seemingly drawn from observation in nature. However, Höfnagel aimed not only at an imitatio, but an aemulatio of nature – an improvement of life by human influence.

What makes Hoefnagel’s graphics and Menezes’ art projects comparable is their artistic intervention of natural conditions through drawings, etchings and aesthetic experiments – understanding the aesthetic quality of natural objects and playing with the human touch.

Below, you can WATCH one of ADA's VIDEO ESSAYS. We explore the idea of 'Anthropocentrism' in Menezes' "Nucleart" (2000), and then visually compare her contemporary Bio Artwork with the historical graphic prints of the Göttweig abbey collection using our Media Art Research Thesaurus. This demonstrates the Thesaurus' function as a research tool:

1.)   What are your current projects?

I am currently very interested in how organisms change over different time scales. The process of domestication, through the selection of more productive variants of crops. The evolution of species. Or the genetic modification of organisms. I am collaborating with scientists to use genome editing tools (CRISPR-Cas9) in order to make organisms less artificial. I intend to remove genetic modifications or mutations by means of CRISPR-Cas9, rendering a new organism that is more similar to the wild. In a similar project I am also using the same technology together with the genomic information in order to reverse the acquisition of characteristics acquired through domestication. In a way, reproducing the process George Gessert has used, based on selective breeding, to generate ornamental flowers that are closer to the wild variants, but through a more direct approach. These projects will create a tension between natural and artificial – an issue that I have been revisiting through my career.

2.)   MEDIA: What made you choose DNA, neurons, cell tissue etc. as material to create your art?

I always strive to find the most adequate medium to explore a given concept. The recent developments in biotechnology allow the use of biological material in a very powerful way, to address conceptual issues that would be hard to approach with more traditional medium. Especially the subject of “authenticity” imposes careful consideration regarding the medium. For example, it would be very easy to change the pattern of butterflies using image manipulation software and photographic or video representations of the organisms. Perhaps in a world where alternative facts and post-truth become more prominent the authenticity may become less important. However, I still believe that the medium is essential to the message – the same statue in marble or steel conveys a different meaning.

3.)   HISTORIES: How do you feel about the work Nature? (1999-2000) today? Do you consider 15 years a long time span for Bio Art projects in regard to the development of research and technology?

It is interesting to look back at artworks I created 15 or 10 years ago and see what makes them actual. I believe that the key for the long life-span is the concept underlying the artwork. In the particular case of Nature? the tension between the natural and the artificial – the fact that the butterflies are completely natural, where not even the genes were altered, and yet the consequence of a human intervention (interestingly a similar concept I am revisiting now with a different approach, as described above). The technology was critical to achieve the modification in Nature?, but the technology itself is irrelevant. Artworks that are more closely related to a technique don’t age so well – as that technique becomes obsolete the artwork has a big risk to become “dated”. In my work I always try to work around a concept, and not centered on a specific technology.

4.)   PROCESS: How do you create and develop your art projects in laboratories? How do you cooperate with the scientists working there?

I like to be immersed in the laboratory routine doing the same things that scientists do. This approach forces me to be humble as I need to learn a great deal of things every time I join a different laboratory. At the same time it allows me to show the scientists that I understand how a research laboratory operates, and I am capable to perform the methods quickly (as I have already went through this process many times). This process makes the scientists comfortable with my presence and, at the same time, allows me the opportunity to learn and to modulate my project through what I learn. I also like to participate in the lab routine, namely discussing the progress of the work in the lab meetings. This approach allows a greater interaction with all members of the lab.

5.)   INSPIRATION: Are any artists and/or scientists particularly important to your art works as inspiration?

Lewis Wolpert in his book “The Unnatural Nature of Science” stated that a key difference between science and other human endeavors is that the scientist is irrelevant, while (for example) the artist is not. In the absence of Darwin, natural selection as a driving force of evolution would have been known today through contributions of other scientists. The structure of DNA as a double helix – an inspiring discovery of the 20th century was bound to happen in different laboratories at the same time. On the contrary, without Shakespeare the Hamlet would never have been written. As a consequence, scientific advances are far more inspiring than the people behind those advances – they have this universality, inevitability and neutrality that I find amazing. Universality because it is shared by all (i.e. the structure of DNA is not context dependent); inevitability because, in general, sooner or later the scientific advances will happen (like the example of the identification of the DNA structure), and neutrality because, in general, science is not rooted on prejudice (an issue more controversial as recent controversies regarding climate change or evolution demonstrate).

I have many artists whose work I feel inspiring, namely George Gessert that I mentioned above, that I would not like to list as I would be bound to forget some.

6.)   PRESERVATION: Do you agree that Bio Art should be preserved even if the archived work itself differs from the original, or do you believe that the ephemerality of it is part of the beauty of Bio Art?

This is an important issue in Bio Art. In fact I am involved in an European network, with the participation of several institutions including conservators, to address this issue. I believe however, that Bio Art is very diverse and different artworks may create different problems. The preservation of ephemeral artworks is not a new problem. I believe archived work can be one solution to several artworks, but there are more interesting possibilities. In many cases I prefer that my works that are in collections to be preserved as a set of instructions – something like a music score. This allows the re-interpretation of those instructions at a later time by other person. In the same way that there are no two music performances equal, there won’t be two recreations of the artwork exactly the same. But in all cases the underlying concept should be conveyed and the input from the performer can, in principle, add a beneficial new layer of complexity to the artwork.

7.)   ONLINE ARCHIVING: How do you document your art works on your homepage?

The artworks on my homepage are documented through text, images and, in some cases, video. It is perhaps not the best way, but I did not find yet a better solution!

Go back to Featured Artist Overview

Image Credits: Scroll over the images to see credits. All images from the Archive of Digital Art and the Media Art Research Thesaurus.