3D Computer Graphics, Virtual Reality, and Urban Media Landscapes- with his artworks and through various digital media ADA’s featured artist Maurice Benayoun (aka MoBen or 莫奔) explores the multilayered relations between humanity and technology since the 1980s. With a background in Fine Arts, his early work showed an interest in viewer participation and visual perception which channeled to his critical and aesthetic perspectives in digital art.
Today, MoBen has won numerous awards (SACD Award 2002, Golden Nica 1998, SIGGRAPH Truevision 1990) and has exhibitions all over the world (ISEA 2019, Microwave Festival 2018, Animamix Biennale 2015-16).
From Algeria to France and East-Asia, he works as curator and scholar at Hong Kong’s City University and Paris 8 University. His PhD thesis may have been the first one written as Internet Blog (the-dump.net, 2008, La Sorbonne, Supervisor Anne-Marie Duguet).

:: Read about his education and artistic background on his ADA profile ::

MoBen engages in the diverse relations between communication, emotion, memory and technicity, showing digital media as mirrors to our reality and to our minds. The limits of (digital) communication and our perception of the world are explored ambiguously and with a critical eye as well as a poetic understanding. In his interactive installations, art blends into science with fantastic narratives, hybrid beings and playful investigations of the human condition in the Digital Age.
These works are often humorous and explorative like his short film series “The Quarxs” (1989), which is one of the very first 3D computer graphic animations shown on TV. 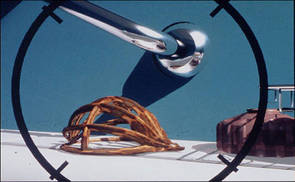 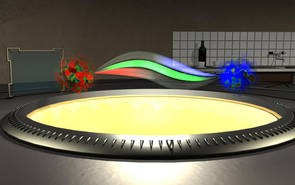 With these images, no one will dare deny the existence of… the Quarxs.
Voice-over from “The Quarxs”, 1989. ©MoBen

Throughout his oeuvre, MoBen has reflected upon digital imagery in its illusionary quality, and has created imaginative mirror worlds in immersive environments. These VR installations, interfaces and films showcase a metaphysical questioning of the human/media relation. In his latest work “Value of Values” (2018/19), morphing and evolving 3D shapes display human values. Interactors create these shapes with their brain waves on concepts like freedom, peace and power.

At times, his interest in technology & perception questions the mediation of (geo-)political events and subjects such as in “World Skin”, which won the Golden Nica in 1998. The virtual reality installation breaks any illusionary effect of VR to create a space of reflection for the viewers/interactors. The connection between photography and reality in terms of knowledge perception and emotional involvement is analysed with the viewer's engagement in the installation. 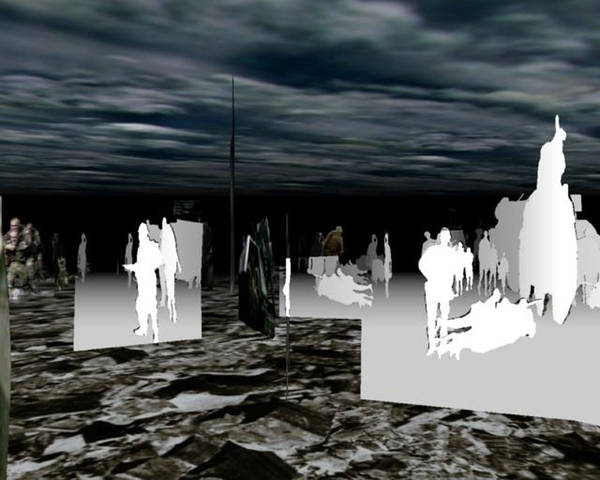 The participatory and collaborative opportunities in digital art are central for most of his works, culminating in his Urban Media Landscapes. In "Emotion Forecast" (2010/11), MoBen created a dynamic interface to display the emotional state of the planet as if based on economy and trade algorhithms. The work was shown on a giant screen in Paris’ city centre.
In Hong Kong, he is head curator for the open sky project for artworks on ICC’s 77,000 square meter LED screen by cutting edge media artists as well as exceptional works by up-and-coming young artists.

”Maurice Benayoun’s photographic safari makes an epistemological comment on the role of photography in our lives, which is to remove the memory of things from our mind and make them available solely via a recording technology. It is also a comment on the desensitizing effect of even upsetting photographs, such as those of war and violence.”

"Although many see the notion of presence, virtual reality, or mixed reality as a totally new phenomenon, it has its foundation in a story that ignores immersive images.[...]

But the panorama of Benayoun is quite the opposite: it breaks the immersion effect and creates, for the viewer, a space of reflection in the sense of Aby Warburg and it includes his free approach in the broader context of several centuries of 'stories of media art.'”

What are your current projects?

MB: My current project are ever growing, ever shifting projects. Some would call them Global Art (in spite of the negative connotation of globalization). I work on some aspects of the technological era that correspond to very primitive expectations of human kind. I develop the concepts of Sublimation (conversion of the World into discreet and/or dematerialized units from calculus to atoms and bits) vs Reification (conversion of our thoughts into objects, crystallization and commodification of abstracts concepts or human values). This leads to new works that infiltrate different fields of human activity. The Brain Factory project started a few years ago, then a fruitful collaboration with Tobias Klein and Jean-Baptiste Barrière where the public is invited, by using BCI/EEG to give shape to human abstractions that will then be reified, converted into objects through 3D printing. The project evolved more recently into Value of Values, a transactional art project with the complicity of Nicolas Mendoza, where the public, converted into Brain Workers, give shape, by Neuro-Design, to Human Values like POWER, LOVE, MONEY, KINDNESS or SUPREMACY. The resulting 3D model becomes an VoV, and artwork registered on the blockchain. The Brain Workers who are paid in VoVs can start bartering or trading them. The transactions determine the relative value of the Values depending on the owner, the City or the Country. The trading generates automatically Transactional Poetry that reflects on how we deal with human values. The project is an Open Media art project, as it combines CGI, EEG, 3D Printing, Sculpture, Design, Poetry, Finance, Ethics… The exhibition is presented all around the world in order to get a wider understanding of the hierarchy of Human values according to cultures.

What path led you to digital art, and what interested/fascinated you about it initially?

MB: In the 80s, completing my studies in Contemporary Art at Paris 1 la Sorbonne, I was disappointed by the evolution of art practice when artists seemed glad to go backwards to past forms of painting. I wanted more, something more adventurous and more critical, and I felt that this was happening with something between Video Art and Conceptual Art. I produced video installations and video documentary interrogating contemporary art practice. Then, together with friends who were architects, I created in 1989 Z-A Production, an opportunity to explore 3D computer graphics. I immediately wanted to experiment the limits of technologies, trying to anticipate at the same time their potential and the risk to trigger new social diseases. Creating one of the very first series of 3D computer Graphics, QUARXS, I understood that I was reaching the limits of the genre. The evolution of VR technologies allowed me, in 1994, to start working with what I expected, one of the best tool to create a live dialogue between the work and its spectator. Interactivity made possible by real time graphics was the best was to interrogate the new territories of art practice. And I started with the big questions…

How do you judge the interest in digital art in your surroundings, in your country?

MB: Officially, the contemporary art world seems to be starting to understand the media art paradigm, even if not really as a part of the market.  In Asia I met more than a motivation for contemporary media art. I found an openness that was free of Western prevention of any cultural production dealing with the dirty technology. This doesn’t mean that everything is accepted if coming from a computer, but at least, it is not a priori disregarded. When I did in 2005 my first show in Beijing, I reached with Cosmopolis, overwriting the City, more than 10 000 people a day. I couldn’t imagine that anywhere else in the world.

When I was proposed in 2012 to join the School of Creative Media, City University of Hong Kong, headed by Jeffrey Shaw back then as a professor, I understood that media art was eventually being considered as a form of research. This was never clearly expressed in French Academia I was used to dealing with.

Most digital artworks are created collaboratively. How many people are involved in your artworks on average, and how would you describe the artistic development of your works as a collective/individual process?

MB: Most of the time I work with a team, like film director and architects, two disciplines I used to practice, it is difficult to reach a level of expertise in all fields of competencies implied by this kind of practice. I’m not of the generation of people born with a computer in the stroller, and I’m pretty envious of those now that can study in school disciplines that we would have to learn by practicing and sometimes to invent. I try to be surrounded by very talented people working on engineering to make my projects possible.

Let’s say that, if some projects like Cosmopolis involved up to 50 people, Value of Values, 15, some other projects can be done with 1 or 2 collaborators.

I usually have a clear idea of what I want, but I’m always open to exciting suggestions by the team.

Your works show a critical approach towards new media. What would you say has been a positive/ negative development of the various media which you used in your works (from late 1980s until today)?

MB: I have known the excitement of producing early 3DCG, but I have always been clear about what I consider as the role of the artist in society. The artist has to choose between 2 attitudes: what I call sometimes “Cosmetics” -the decorative aspect of practice, between entertainment and social make up- and on the other hand “Critical Fusion” -the infiltration of society to create awareness-. In a way, the artist for me is like the virus which is now said to have created “consciousness” in living beings brains. We know how capitalism encourage the pace of technological innovation, to strengthen the market and increase the profits. This doesn’t mean that society can integrate that speed as an asset. As Paul Virilio could have said, the higher the speed, the bigger the crash.

How do you archive your own works?

MB: I used to post online my works and documentation to archive them, and my website is a collection of documents. Of course, I enjoyed from its creation, the existence of a gold mine like ADA. Better than collecting one artist archives, it allows the researcher to have a horizontal perception of art history.

The point is that it is more difficult to archive software, and it happened to me to have to recreate the work out of video recordings because the original customized software is not anymore compatible with today’s machines or libraries.

I’m also lucky because a few years ago, INA (French National Institute of Audio Visual) offered me to digitize my videos, from the original tapes, and to grant access to researchers. Thanks to INA, 500 of my tapes are now available at the French National Library. An artist’s dream!