Simon BIGGS featured by the ARCHIVE of DIGITAL ART

Simon Biggs’ artistic interest in electronic and digital media goes back to the 1970s. Since then, he has evolved into one of the leading artists of the field and works as scholar, writer and curator who explores a multitude of subjects within Digital Art such as digital poetics, interactive and performative environments and posthumanity. His art works have been exhibited all over the world (including Tate Modern, Centre George Pompidou, Walker Art Center, Akademie der Kuenste Berlin) and he has held keynotes at conferences worldwide (including ISEA 2015 and ICA 2008).

His earliest works in the genre of Digital Graphics consisted of minimalistic real-time computer animations constructed algorithmically. Today, his research topics vary from augmented reality, performance environments to electronic writing and data analysis, where he focuses on the influence of digitisation on our bodily perception between artificial intelligence, phenomenology and semiotics. His works give insights into the production and reception of meaning within a socio-technical system. The manifold expressions of his art vary from digitally mediated performance installations to computer programmes. “The Great Wall of China” (1996) is a real-time interactive language machine, which was shown in a website, a CD-ROM and an interactive installation. Through object-oriented and behavioural programming techniques and based on a basic grammar system, text emerges from the formation of the language itself as something simultaneously written and read. In “Dark Matter” (2016), multi participants interact with textual fragments and become inferred from the physical and cultural information around it to question the meaning of a “collective unconscious” within individual knowledge and identity.

Sean CUBITT: Unlike the familiar human-computer interface, Biggs opens up the body to the experience of the digital: moves the corporeal from the stasis of cinema (and the railway carriage) to the movement of architecture, ghosting in the secular the Gothic’s divine architecture of light, but preserving the escape from destiny so long fought for and so weakly held.

Wolf LIESER: As one of the first artists ever, Simon Biggs has not only made his net art works available online, but pioneered in publishing a CD-ROM with interactive software art in 2000, which sold out immediately.

Find out more about Simon BIGGS from his early works to new installations, or search for related topics and art on the keyword index: www.digitalartarchive.at/database/artists/general/artist/biggs.html 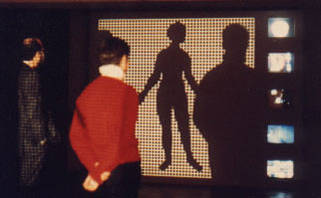 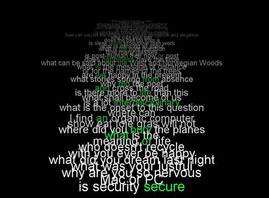 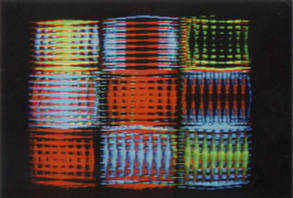 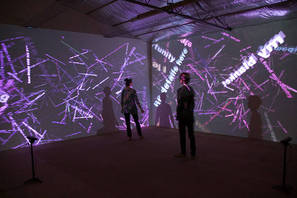