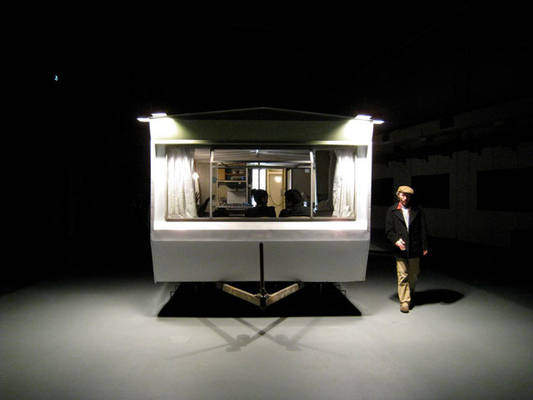 The work consists of two walk-in objects: mobile habitats that were built in the early 1980's, around the end of a period of intense imaginations and activity around caravaning, travellers, architectural speculations on mobility, and low-income prefab housing, in the UK. The first object is a "static" mobile home, which now moves slowly down the length of the room. It slides past the neighbour: a camper van, which, as it turns out, is quite obsessed with the former. Together they alternately assemble or stretch thin a "neighbourhood" - a nearness in time, a bug or two (an eavesdrop), some english lace - and an acknowledgement of our inability, historically, to escape each other.

The two "homes" additionally contain objects, books, paperwork and audio tapes that were found in them, or were removed from one to the other.
Descriptions & Essays
"The neighbour, neither friend nor enemy, is the one who may not be in your "network", but is nevertheless in your world." (Sukumaran) This ambitious project is Sukumaran's first major one-person exhibition in the UK. In The Neighbour, two ostensibly "mobile" habitats share space. One is a "static" mobile home from the late 1970s, which developed as a way for lower-middle class families to partake in "caravan culture", or escape longer term from the city and its property regimes. The second, coming from another direction in the same period, is a camper van, which follows gypsies and travellers in an attempt to produce the continuously nomadic home, built in the car factory. These two objects, from the inside and out, ask us to inhabit questions about the contemporary housing industry, the overlaps in our landscapes of desire, of crisis, and the psychic dimensions of enclosure and spacing that have evolved not just among people, but also among competing machines, and their regulatory frameworks.
Literature
Exhibitions & Events
2006
Festival :
»Ars Electronica 2006: Simplicity, Brucknerhaus«
Ars Electronica Linz GmbH & Co KG
2006
Conferences:
»ISEA 2006 [The Thirteenth International Symposium on Electronic Art]«
ISEA International