»Tell Me the Truth« 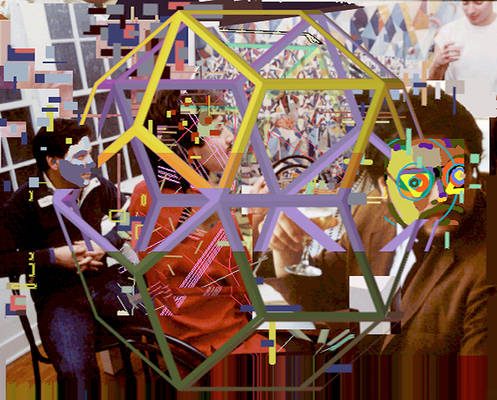 Acevedo's image called Tell Me the Truth had several inspirational inputs. One of which was M.C. Escher's print called Stars. There was something about the classical wood construction of the windowed poyhedra in that image that was delightful. The enclosure in Escher's print is formed by three interpenetrating octahedra, and they function as a polyhedral perch for a pair of seriously playful chameleons. In this piece a rhombic triacontahedron designed with reminiscent if not similar edge treatments, encloses and connects the three figures grouped in an otherwise fractured proximity given their image origins from two separate photographs.

Victor: My friend, geometer David Koski helped me build it as a 3D computer graphic model on the Cubicomp some time in 1988 or 1989. This image is about my older brother, David Acevedo, an excellent artist in his own right, who tragically succumbed to brain cancer in 1986.

The final image was created by combining two digitized photos, one of David, bearded, in a coat and tie having a glass of wine and the other photo is of a few friends sitting around a table in Hollywood in front of my 1981 oil painting called Le Grande Petit Dejeuner: Visceral Analytic.

The original 35mm slide also shows my father Enrique (Nick) Acevedo. He and David are sitting together at a table before dinner at a hotel in Manama, Bahrain in 1979. This same photo was also the source for a later composition called 6.26.26.86 – it too, was about David, yet featured my father as the protagonist. From this initial synthesis the compositional trajectory split off in two different but related directions.

Some of the early versions of Tell Me the Truth show how I was ‘auditioning’ a cubocatahedron for the center piece. It was Cubicomp built geometry from an early incomplete attempt at animating Buckminster Fuller’s famous Jitterbug (Cuboctahedron-Icosahedron-Octahedon transformation). I was able to accomplish this a few years later using the software called Softimage.

Revisiting these working versions decades later, I feel that the wire frame cuboctahedral components make for some interesting graphical play. I was also reminded how the final composition took shape gradually across many iterations and that the final central polyhedron was added toward the end of the process. Another important move was to paste David’s image into the right corner of the second photograph at once interrupting its space while simultaneously cohering the psychologic structure of the piece. These two disparate domains are then perceptually bridged by the triacontahedron.

Dating from my PC paint system days, Tell Me the Truth includes computer graphic artifacts like "wire-frame debris" and "brush strokes" using the software's rectangular fill feature. I even kept in the accidental data slur (seen at the bottom of the picture) as part of the final composition. This happened when saving it to a hard drive that was too full to accommodate all the new data.