»Some pigeons are more equal than others« 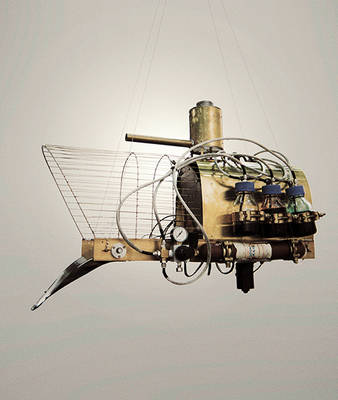 Cite
X
Archive of Digital Art (ADA). “Julius von Bismarck - »Some pigeons are more equal than others«”. https://digitalartarchive.at/database/general/work/some-pigeons-are-more-equal-than-others-1.html (retrieved 2016-09-02). @online{ADAartistprofile, author = {Archive of Digital Art (ADA)}, title = {Julius von Bismarck - »Some pigeons are more equal than others«}, url = {https://digitalartarchive.at/database/general/work/some-pigeons-are-more-equal-than-others-1.html}, urldate = {retrieved 2016-09-02}
Technology
Descriptions & Essays
DA Editor 09-02-2016
Unusual, bright-colored birds were observed on the Piazza San Marco in the summer of 2012, and in Copenhagen in the same year similar birds were sighted, which largely maintained close proximity to pigeons.
When looking at the birds more closely, observers realized with surprise that the animals were indeed pigeons— with dyed feathers.
Julius von Bismarck and Julian Charrierre developed an apparatus that was installed in public space to attract and trap pigeons. Once caught, the birds were sprayed with natural dyes of different colors before being released again into the city.
This infusion of color lends a new dimension to the familiar experience of an encounter between a human and a bright-colored animal. The pigeon—at best considered an easily ignored carrier of disease and sign of urban cultural malaise—suddenly becomes an animal. The temporary and artificial alteration in the bird’s coloring is enough to bring about its renaturalization.
Source:http://juliusvonbismarck.com/bank/index.php?/projects/some-pigeons-are-more-equal-than-others/
DA Editor: Some pigeons are more equal than others, 09-02-2016, in: Archive of Digital Art
Literature
Exhibitions & Events