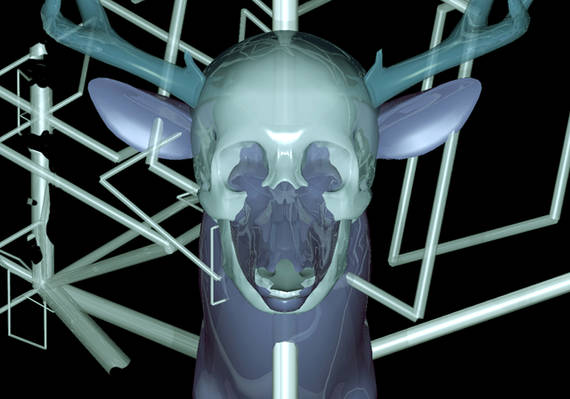 The original version of this image, Skull v1 was first shown in August 1994 at the Sam Francis Gallery at the Crossroads School in Santa Monica, California in a group exhibition called Digital L.A. This second version of Skull had its public debut in New York City in August 1996. In September 2001 Skull v2 was reproduced on the cover of Leonardo (Journal of the International Society of Arts, Sciences and Technology) Volume 34 Number 4. In 2005 it was shown for the first time at the Los Angeles Center for Digital Art (LACDA) as part of the group show called Synapse and there again in May 2019 as part of Acevedo’s retrospective solo show.

Victor: Skull v2 was created from the interpenetration of two found digital objects, a human skull and a deer’s head. This ‘post-Beuysian’ pagan-effigy is, for me, reminiscent of the protagonist in my early oil painting called Napoleonic Seal, 1979. Given the popularity of skull imagery, I always thought this would be a great image to put on a T-shirt. When I started my Etsy Shop in 2019 I was finally able to make that happen. However, I found it best to modify the image somewhat in order to more effectively integrate with the T-shirt as ‘canvas’. A black T-shirt for the substrate color of course was the priority choice for the first run.

(excerpted from Acevedo in Context, 40-year career survey 1977-2020 with contributing author Peter Frank and others. To be published in 2022 by Acevedomedia
Victor Acevedo: Skull v02, 24-01-2022, in: Archive of Digital Art
Literature