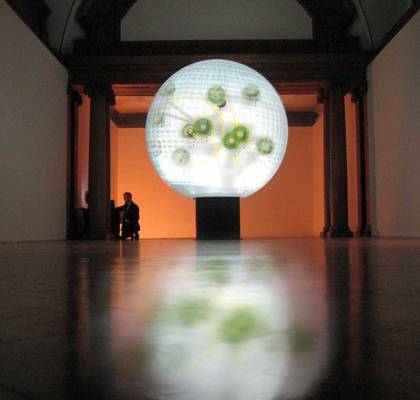 All rights reserved. The copyright for any material published on this website is reserved. Any duplication or use of objects such as images, diagrams and texts is not permitted without Stanza's written agreement.

Cite
X
Archive of Digital Art (ADA). “ Stanza - »Sensity«”. https://digitalartarchive.at/database/general/work/sensity.html (retrieved 2010-03-11). @online{ADAartistprofile, author = {Archive of Digital Art (ADA)}, title = { Stanza - »Sensity«}, url = {https://digitalartarchive.at/database/general/work/sensity.html}, urldate = {retrieved 2010-03-11}
Technology
Software
The technology presently consists of Xbow's MICA2 motes and MICA2DOT motes. It uses an Atmel Atemega 128L processor running at 4 megahertz. It also has some flash memory to store the program. It consumes only 8 milliamps when it is running, in lower power mode it will run for more than a year. The trick is to write the program so the mote is asleep for most of the time therefore saving power. The mote can wake up for a few micro seconds and then sleep again for period of time. They have an a/d converter so the sensor data can be digitized. The software is written to control the mote is built on an OS called Tiny OS. The chips contain all the components found in a mote: a CPU, memory, and A/D converter for reading data and radio transmitter. Tiny OS is written is Nes C, a special programming language for motes developed at Berkeley.

To do this for the 420CC one has to hack the two programs together for the low and high power mode and then upload via OATP as a lower power version. This was it gets a GPS fix.
In addtion.

There is a kit or suite of tools called task which consists of:-
TINY DB. Allows interaction with sensor network through declarative SQL interface.
TASK server. A server running on the gateway acts as a proxy for the sensor network on the internet via xml and interpreted by custom built software.
TASK DBMS. A relational database that stores sensor readings, sensor health, sensors locations, etc
TASK Client Tools. ie a deployment tool, configuration tool and visualization tool.
TASK Field tools. Allow pda for in the field diagnosis.

Issues
Descriptions & Essays
Sensity is part of "The Emergent City" series of works by Stanza. Artworks monitoring the real time interactive city using wireless sensors. If you are interested in exhibiting this artwork get in touch. I am available to visit your city to take data readings, and make a piece of artwork. Please note that the artwork is developing and changing all the time. Sensity can be shown in various ways and stages and outputs. 1. You can also invite me to make a Sensity version in your city in which case I can bring the sensors with me, and make a visualization of your environment. 2. Sensity can then be shown / exhibited as an installation and projected ie, making a display based on the net based interfaces using the data collected. 3. Sensity can be shown / exhibited as an installation on the sphere, but this depends on your budget. 4. Sensity can also installed permanently or for a longer period in rural or urban space, depending on your budget. 5. I am available to give talks on this work. 6. You can fund the next development of my research and artworks which includes:- a) a physical environment a city, CAlle The Emergent City. b) a music system based on changing data all over the city now called Sonicity, its a different project. c) performative system using real time gps for 12 players and also for robots called Robotica 6. EXHIBITIONS SENSITY. Sensity V & A live at Decode show. 2009 - 2010 Sensity Pace Digital New York. 2010 Sensity @Plutopia SXSW Texas. 2009 Radiator Festival and Exhibition Nottingham 2009. "Exploits in the Wireless City". Biennale of Sydney Revolutions – Forms That Turn 2008 Sensity V and A. 2008. Especially made for one evening. Smart City Paris. The event will take place in the 'Salon Honnorat', Cité internationale universitaire de Paris 17, bd. Jourdan. 75014 Paris. 31 october 2008. Motomix, Sao Paulo, Brazil. 2007. Especially made Sao Paulo version. NIME New York City. USA. 2007. Sensity project at Share IT in Italy 2007. Dislocate. Koiwa Art Space Tokyo Japan. 2007. Also presented at Force of Metadata Conference at Goldsmiths college. 2008 Stanza is an independent UK based artist. Read a review on Futherfield.
Literature
Beddard, Honor and Douglas Dodds. V and A Pattern: Digital Pioneers. London: V and A Publishing, 2009.
Catherine Mason. A Computer in the Art Room: The Origins of British Computer Arts 1950-1980. Norfolk, UK: JJG Publishing, 2008.
Exhibitions & Events
2009
Exhibition :
»Decode: Digital Design Sensations«
Victoria & Albert Museum