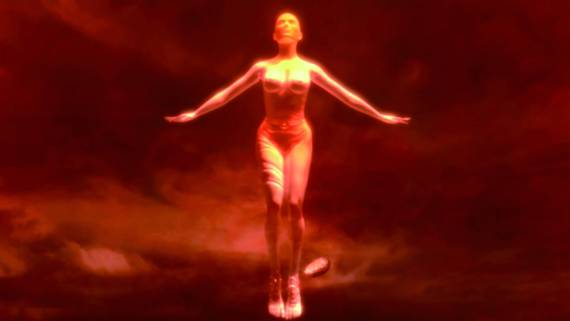 Cite
X
Archive of Digital Art (ADA). “Lin Pey-Chwen - »Revelation of Eve Clone IV«”. https://digitalartarchive.at/database/general/work/revelation-of-eve-clone-iv-1.html (retrieved 2021-13-10). @online{ADAartistprofile, author = {Archive of Digital Art (ADA)}, title = {Lin Pey-Chwen - »Revelation of Eve Clone IV«}, url = {https://digitalartarchive.at/database/general/work/revelation-of-eve-clone-iv-1.html}, urldate = {retrieved 2021-13-10}
Technology
Display
Media: 3D Animation, Digital Image and Sound, Media Player, Projector, Stereo Dimensions Variable
Year: 2014
Time: 8’01″
Descriptions & Essays
pey-Chwen Lin 23-09-2021
In 2014, I was invited to exhibit Revelation of Eve Clone IV in “Raising the Temperature” at the Queens Museum of Arts, New York. The work presented Eve Clone being submerged by seawater in a ruin. The water was dyed red, like blood from the dead. Although she strived to escape from the water, she was hit by a stone from the sky not sculpted by humans and smashed, becoming like the chaff on the summer threshing floors, and the wind carried them away, that no place was found for them (“The Book of Daniel” 2:31–35). At the end of the film, the stone that smashed the Great Image became a huge mountain, filling up the world. Finally, I used verses from “The Book of Revelation” from the Bible as the ending, which echoed the background hymns to deliver the final fate of technological culture. This work reminded people that the technological culture they worship and the Big Image of the human country’s authority and system will eventually be destroyed by God. The image of the stone in the film referred to the huge stone sign on Mt. Zion because Mt. Zion refers to God’s Kingdom. The Bible verses used in this work were as follows:
So the first angel went and poured out his bowl on the earth, and loathsome, malignant sores broke out on those who had the mark of the beast and worshiped its image. And the second angel poured out his bowl into the sea, and it turned to blood like that of the dead, and every living thing in the sea died. Then the third angel poured out his bowl into the rivers and springs of water, and they turned to blood. And I heard the angel of the waters say: “Righteous are You, O Holy One, who is and who was, because You have brought these judgments. For they have spilled the blood of saints and prophets, and You have given them blood to drink as they deserve” (Revelation 16:2–6).
As you, O king, were watching, a great statue appeared. A great and dazzling statue stood before you, and its form was awesome. The head of the statue was pure gold, its chest and arms were silver, its belly and thighs were bronze, its legs were iron, and its feet were part iron and part clay. While you were watching, a stone was cut out, but not by human hands. It struck the statue on its feet of iron and clay, and crushed them. (Daniel 2:31–34).
pey-Chwen Lin: Revelation of Eve Clone IV, 23-09-2021, in: Archive of Digital Art
Literature