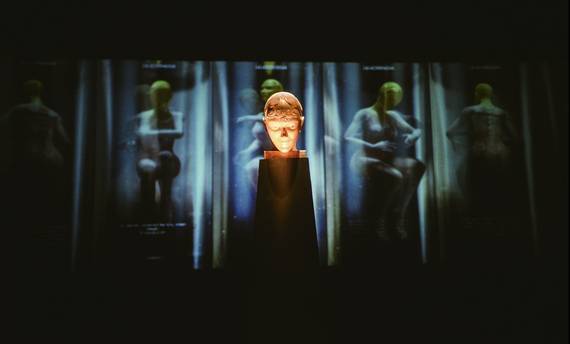 Cite
X
Archive of Digital Art (ADA). “Lin Pey-Chwen - »Revelation of Eve Clone III«”. https://digitalartarchive.at/database/general/work/revelation-of-eve-clone-iii-1.html (retrieved 2021-13-10). @online{ADAartistprofile, author = {Archive of Digital Art (ADA)}, title = {Lin Pey-Chwen - »Revelation of Eve Clone III«}, url = {https://digitalartarchive.at/database/general/work/revelation-of-eve-clone-iii-1.html}, urldate = {retrieved 2021-13-10}
Technology
Display
Media: 3D Animation, Digital Image and Sound, Interactive System, 3D Printing Object,WebCam, Computer, Projector, Stereo
Interactive installation
Dimensions Variable
Year: 2013
Descriptions & Essays
pey-Chwen Lin 23-09-2021
Revelation of Eve Clone III was created and exhibited at the “Post-Humanist Desire” international art exhibition at MOCA Taipei. I used 3D animation to recreate all the characteristics in Revelation of Eve Clone I, such as reproductivity and the Time Code. Additionally, I added the Whore of Babylon, the Number of the Beast, and Bible verses related to the Great Image in the “The Book of Daniel. In this exhibition, Eve Clone’s body had the texture of a golden head, a silver body, a brass belly, iron legs, and half-iron, half-clay feet. Her body, which looked like a fetus with a bowed head, was now a more attractive female body.

Moreover, to show that she was the worshipped Great Image, I printed the animation file of Eve Clone into a 3D golden head, sticking it in the middle of the image so that the audience could touch the Number of the Beast on her forehead. This act of touching had multiple meanings: having sexual intercourse with her, being imprinted with the Number of the Beast, and raising a hand to worship her. In addition, it triggered Eve Clone to raise her head and dance, as if giving her life. The Time Code that keeps changing on the top of her head and the random Bible passages at the bottom of her feet together with the background music with weird iron rubbing sounds that sound like fake hymns convey a feeling of spookiness to the viewers. The Bible description of “The Book of Revelation” and “The Book of Daniel” from the Bible quote in Revelation of Eve Clone I and Revelation of Eve Clone III are as follows:

And the second beast required all people small and great, rich and poor, free and slave, to receive a mark on their right hand or on their forehead. (Revelation 13:16).
so that no one could buy or sell unless he had the mark—the name of the beast or the number of its name. (Revelation 13:17).
Here is a call for wisdom: Let the one who has insight calculate the number of the beast, for it is the number of a man, and that number is 666. (Revelation 13:18).
Then one of the seven angels with the seven bowls came and told me, ‘Come, I will show you the punishment of the great prostitute, who sits on many waters. (Revelation 17:1).
“The kings of the earth were sexually immoral with her, and those who dwell on the earth were intoxicated with the wine of her immorality” (Revelation 17:2).
On her forehead a mysterious name was written: BABYLON THE GREAT, THE MOTHER OF PROSTITUTES AND OF THE ABOMINATIONS OF THE EARTH. (Revelation 17:5).
Then the angel said to me, The waters you saw, where the prostitute was seated, are peoples and multitudes and nations and tongues. (Revelation 17:15).
And the woman you saw is the great city that rules over the kings of the earth. (Revelation 17:18).
All the nations have drunk the wine of the passion of her immorality. The kings of the earth were immoral with her, and the merchants of the earth have grown wealthy from the extravagance of her luxury. (Revelation 18:3).
As you, O king, were watching, a great statue appeared. A great and dazzling statue stood before you, and its form was awesome. (Daniel 2:31).
The head of the statue was pure gold, its chest and arms were silver, its belly and thighs were bronze. (Daniel 2:32).
its legs were iron, and its feet were part iron and part clay. (Daniel 2:33).While you were watching, a stone was cut out, but not by human hands. It struck the statue on its feet of iron and clay, and crushed them. (Daniel 2:34).
pey-Chwen Lin: Revelation of Eve Clone III, 23-09-2021, in: Archive of Digital Art
Literature