»Revelation of Eve Clone I« 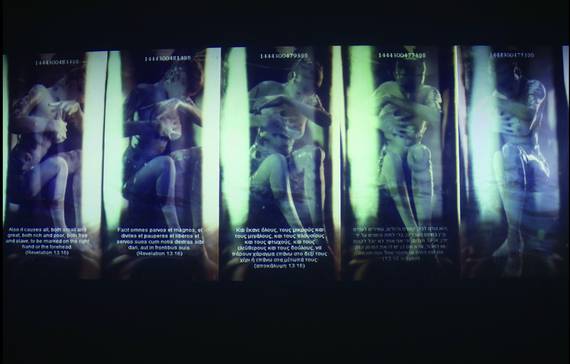 Eve Clone’s life index (the Time Code on the computer) increases in milliseconds as time goes by, showing her coexistence with humans. Finally, to define and reveal Eve Clone’s identity and power to control humans, I boldly incorporated Bible passages from the “The Book of Revelation” about the Whore of Babylon and 666, the Number of the Beast, presented in six powerful languages at the bottom of each Eve Clone. The languages included Latin, Greek, and Hebrew, representing the three powers of politics, culture, and religion, respectively, because it was written in these three languages when Jesus was crucified: “Jesus Of Nazareth The King Of The Jews” (John 19:19–20). Chinese, English, and Arabic were also included to represent the three contemporary strong powers. The text was randomly shown at the bottom of the image by the computer, and the background music was hymns mixed with weird iron rubbing sound effects to emphasize the fake holiness. Each time the work was exhibited, the Time Code of Eve Clone differed. Later, in order to record her Time Code each time, I created the series Making of Eve Clone Documentation.
pey-Chwen Lin: Revelation of Eve Clone I, 23-09-2021, in: Archive of Digital Art
Literature