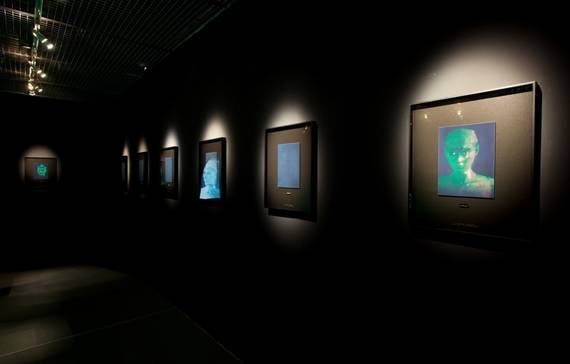 Cite
X
Archive of Digital Art (ADA). “Lin Pey-Chwen - »Portrait of Eve Clone«”. https://digitalartarchive.at/database/general/work/portrait-of-eve-clone-1.html (retrieved 2021-18-10). @online{ADAartistprofile, author = {Archive of Digital Art (ADA)}, title = {Lin Pey-Chwen - »Portrait of Eve Clone«}, url = {https://digitalartarchive.at/database/general/work/portrait-of-eve-clone-1.html}, urldate = {retrieved 2021-18-10}
Technology
Display
Media: 3D Animation, Moving Hologram, Acrylic Frame, Spotlight
Size: 57cm x 45cm x 3cm each piece
Descriptions & Essays
pey-Chwen Lin 23-09-2021
I named it Eve Clone as God created Eve, and humans want to play God and created a cloned Eve. I integrate the elements of the human chrysalis and human beast to shape the double identities of Eve Clone, who was both charming and evil. I quoted the Whore of Babylon recorded in the Bible “With whom the kings of the earth have committed fornication, and the inhabitants of the earth have been made drunk with the wine of her fornication” (Revelation 17:2) as well as placing the Number of the Beast, 666 in different languages, on Eve Clone’s forehead and right hand as a symbol of evil (“And he causeth all, both small and great, rich and poor, free and bond, to receive a mark in their right hand, or in their foreheads” (Revelation 13:16)) to show that technological culture is like the Whore of Babylon and the Number of the Beast, which seduce and control humans.

The Portrait of Eve Clone exhibited at MOCA Taipei in 2011 used 3D animated holograms as the medium to present her charming gaze and posture. She only lived under the spotlight (without light, Eve Clone was invisible). What was rarer was that when the viewer saw her from different angles, her gaze followed and stared at the viewer, whereas when the viewer stood still to look at her, she stopped moving. Like Eve Clone, the technological culture is attractive, yet it seduces and controls humans, like the Whore of Babylon.
pey-Chwen Lin: Portrait of Eve Clone, 23-09-2021, in: Archive of Digital Art
Literature