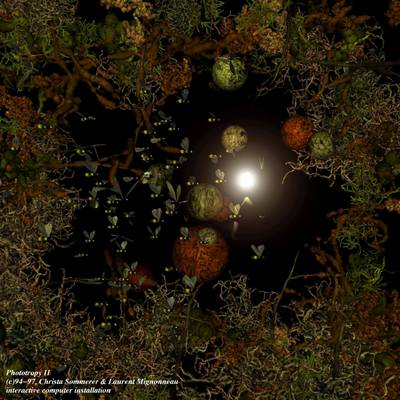 When reaching a certain quantity of light intensity, the insect-like artificial creatures will be able to reproduce, by exchanging their genetic information. Two creatures will then produce an offspring, that carries the genetic code of the parents, The child insect will follow the light source as well.

Carefully moving the lamp on the projection wall ( a normal white wall is used as a projection screen), one can increase the insect population within seconds, creating a swarm of flying insects, who's movement very much resemble butterflies behavior.

The life and existence of these artificial insects is exclusively bound to the source of light..

Without light the organisms will die and fade away immediately.

When switching off the lamp or not reaching sufficient light, the insects will pass away, by elegantly floating onto the ground.

Light is the motor and source for life, growth, reproduction, evolution and movement. But when insects reach the very center of the light beam and thus stay too long at the "hot spot" of the lamp, the light virtually becomes a danger, burning the insects to death.

The visitor has to be careful with his lamp. Though it is very easy to use ( a normal torch lamp functions as interface), it requires the viewers responsibility and care for the creatures. If he moves too fast, the insects will hardly follow, and thus will have no time and occasion for reproduction. If he moves the lamp too slowly, the insects will reproduce rapidly, but reach the center of the beam too quickly: hence they will burn and die as fast as they were born.

To really appreciate the creation and the development of new populations and individuals, the viewer becomes responsible for their creation, their evolution and their survival.

To create new generations, the viewer will nourish the insects well, or go back to an early stage of insect development:

by switching off his lamp, an autonomous self-generated growth of cocoons will take place: the metaphorical birthplace for new generations of insects. Round fruit-like nests are created among organic network and branch structures: they are the reservoir for new metamorphoses: each cocoon bears a new insect larva inside, that waits to be raised by the viewer.

The visitor now can decide: if, and how many cocoons he want to awake and how many new larvae he wants to nourish with his lamp.

By lightening onto the cocoon, the small, initially quiet insect larva, will "arise" and slowly start to fly: the visitor will give light to them and nourish them. Again these new generation of insects will follow the light, will reproduce and die after a while. Thus "Phototropy" represents a life cylcle of artificially living insect generations that evolve and develop over time.

A life cycle of the metamorphosis of life is created in "Phototropy".

Life is not only seen as a temporary appearance, it is considered to be an involving mechanisms, that links the artificial life of the insects to the real life of the visitors.

Light functions as a medium for this transit.

It is a real and also unreal medium.

Mankind has always been fascinated by the power and force of light, that so strikingly influences all our existence. Light is a metaphor for energy: most animals and plants can not survive without light.

In "Phototropy" real light controls the artificial life as well. A very direct and very natural link between real and unreal is made, by using our most significant natural energy source: LIGHT.

In "Phototropy" the viewers are again free to move in the space of the installation, without being connected to any devices.

Natural interaction with a virtual world is a major principle of freedom and a significant target in Mignonneau's and Sommerer's interactive computer installations.

In "Phototropy" the visitor simply takes a lamp into his hand and will start to explore and discover the vegetative and organic world of a sensitive, fragile, artificial biosphere.