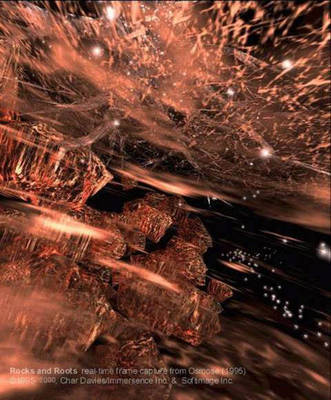 Cite
X
Archive of Digital Art (ADA). “Char Davies - »OSMOSE«”. https://digitalartarchive.at/database/general/work/osmose.html (retrieved 2009-20-07). @online{ADAartistprofile, author = {Archive of Digital Art (ADA)}, title = {Char Davies - »OSMOSE«}, url = {https://digitalartarchive.at/database/general/work/osmose.html}, urldate = {retrieved 2009-20-07}
Technology
Hardware
Mac computer (sound), sound synthesizers and processors, stereoscopic head-mounted display with 3D localized sound, breathing/balance interface vest, motion capture devices, data projector, projection screen, and shadow-silhouette screen.
Installation Requirements / Space
During public installations of Osmose, immersion takes place in a private chamber adjacent to a large darkened space where museum visitors can witness the immersive performances as they take place in real time: both aurally, as sound is generated by the immersants behaviour within the work; and visually, as imagery generated from the immersants point-of-view is projected in real time onto a large-scale video horizontal screen. Simultaneously, the shadow-silhouette of the immersant is cast through a translucent vertical screen, emphasizing the relationship between bodily presence and the immersive experience.
Software
Initial development 1994-1995: Softimage® 3|D modeling, animation and development environment and custom-written VR software; Silicon Graphics Onyx2 Infinite Reality visualization supercomputer. Reengineered in 2002 to run graphics entirely on a PC.
Descriptions & Essays
An immersive interactive virtual-realty environment installation with 3D computer graphics and interactive 3D sound, a head-mounted display and real-time motion tracking based on breathing and balance. Osmose is a space for exploring the perceptual interplay between self and world, i.e. a place for facilitating awareness of one's own self as consciousness embodied in enveloping space. Immersion in Osmose begins with the donning of the head-mounted display and motion-tracking vest. The first virtual space encountered is a three-dimensional Cartesian Grid which functions as an orientation space. With the immersant's first breaths, the grid gives way to a clearing in a forest. There are a dozen world-spaces in Osmose, most based on metaphorical aspects of nature. These include Clearing, Forest, Tree, Leaf, Cloud, Pond, Subterranean Earth, and Abyss. There is also a substratum, Code, which contains much of the actual software used to create the work, and a superstratum, Text, a space consisting of quotes from the artist and excerpts of relevant texts on technology, the body and nature. Code and Text function as conceptual parentheses around the worlds within. Through use of their own breath and balance, immersants are able to journey anywhere within these worlds as well as hover in the ambiguous transition areas in between. After fifteen minutes of immersion, the LifeWorld appears and slowly but irretrievably recedes, bringing the session to an end. In Osmose, Char Davies challenges conventional approaches to virtual reality. In contrast to the hard-edged realism of most 3D-computer graphics, the visual aesthetic of Osmose is semi- representational / semi-abstract and translucent, consisting of semi-transparent textures and flowing particles. Figure/ground relationships are spatially ambiguous, and transitions between worlds are subtle and slow. This mode of representation serves to 'evoke' rather than illustrate and is derived from Davies' previous work as a painter. The sounds within Osmose are spatially multi- dimensional and have been designed to respond to changes in the immersant's location, direction and speed: the source of their complexity is a sampling of a male and female voice.
Literature
Davies, Char. »Virtual Space.« In Space: In Science, Art and Society, edited by Francois Penz and Gregory Radick and Robert Howell, 69-104. Cambridge: Cambridge University Press, 2004.
Davies, Char. »Landscape, Earth, Body, and Time in the Immersive Virtual Environments Osmose and Ephémère.« In Women, Art, and Technology, edited by Judy Malloy, 322-337. Cambridge, London: MIT Press, 2003.