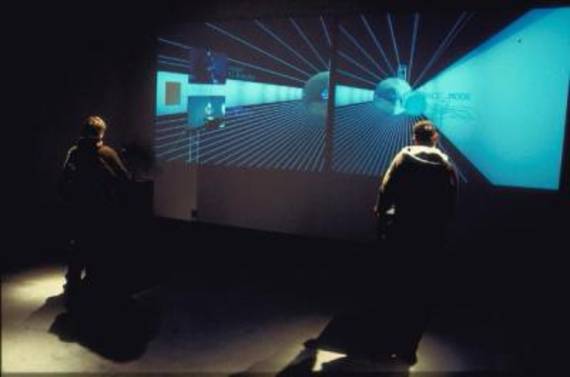 
Cite
X
Archive of Digital Art (ADA). “Masaki Fujihata - »Nuzzle Afar«”. https://digitalartarchive.at/database/general/work/nuzzle-afar.html (retrieved 1970-01-01). @online{ADAartistprofile, author = {Archive of Digital Art (ADA)}, title = {Masaki Fujihata - »Nuzzle Afar«}, url = {https://digitalartarchive.at/database/general/work/nuzzle-afar.html}, urldate = {retrieved 1970-01-01}
Technology
Descriptions & Essays
"Nuzzle" is a shared 3D virtual environment art work, using digital networking technology. It realizes a new type of communication space where people can meet and talk to each other as avatars from several telematic immersive computer terminals. Two terminals are set up at each distant location, in this case at the Zentrum für Kunst und Medientechnologie in Karlsruhe and at the Dutch Electronic Art Festival, DEAF98, in Rotterdam. Each terminal has a large video projection and a pedestal with a TrackBall as a navigation interface, and a microphone for conversation. Video cameras are placed near the screen, recording the people playing with the TrackBall. The computers coordinating the communication between the different terminals are connected through ISDN lines. In the virtual environment that is projected onto the wall, each terminal is represented by an avatar, a coloured object hovering in the virtual space. Each of the video images from the terminals is pasted onto the surface of an avatar, so that on the "faces" of the other avatars one can see the visitors at the respective terminals. When navigating around the virtual space, the avatars leave a line trace. This trace can be used to trace out the owner of the trace. When you "catch" one of these traces, the computer automatically brings you to the other avatar by tracing out his trace. The line traces remain in the space for several minutes, describing the space through the movements that have passed through it. The view one gets of the virtual environment and of the other avatars is controlled by rolling the TrackBall and thus navigating one"s own avatar. When two avatars get so close that they merge, an alternative world is born. This world is closed, and the form of avatar changes into a simpler form, becoming just a moveable rectangle video texure mapped screen. This virtual screen is controlled from an outside, objective perspective, so that one can now see oneself on that screen. The two avatars are now locked together, and there is no description about how they can return to the former public space. They have to communicate and collaborate to find a key to split. The space of the virtual environment is completely abstract. Several different worlds overlap in the same space, each being identified by different characteristics like density or forces which move the avatars automatically in some direction, like a current. The worlds are sharing the same space like parallel universes. Visitors can observe what goes on in the other world from their own world, yet, they cannot share the experience of what happens in the other world. To change from one world to the other, one has to use key objects which function like worm holes, connecting the parallel worlds. The aim of this work is to abstract the communication space. The space can be examined interactively by participants at the networked connected terminals in each installation sites in real space. "Nuzzle" is an extended version of an earlier shared virtual environment art piece, "Global Interior Project" (1996), which dealt with the differences between real space and virtual space. Global Interior Project made it possible to compare the differences between a face-to-face conversation in real space and an avatar-to-avatar conversation in virtual space. Yet, the reactions and conversations of participants were mostly simple and minimal, such as "Hello", "Where are you?", and "Can you hear me?". In this virtual environment, the purpose of communication was unclear because the function of avatar did not afford a certain role to the participant. This made the space meaningless. In contrast, "Nuzzle" tries to afford the role of play to participants who have to explore the space for discovering the key of communication. That is the role of this space.
Literature
Exhibitions & Events
2002
Exhibition :
»Future Cinema «
ZKM
1999
Exhibition :
»PERSPECTIVE International Media Art and Media History Exhibition«
Mûcsarnok / Kunsthalle Budapest
1998
Exhibition :
»SurroGate 1«
ZKM