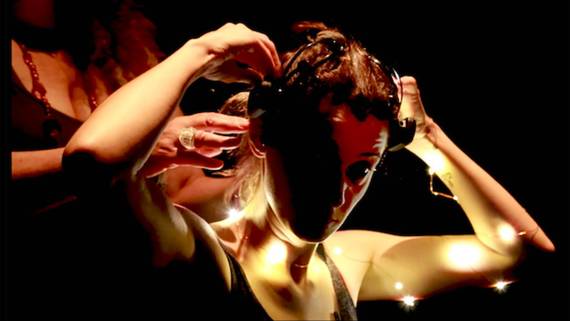 © https://www.facebook.com/noorabrainopera/; Peering into Noor's brain (played by performer Saba Arat) as her emotions launch an image from a databank of video images

Cite
X
Archive of Digital Art (ADA). “Ellen Pearlman - »Noor: A Brain Opera«”. https://digitalartarchive.at/database/general/work/noor-a-brain-opera.html (retrieved 2018-20-07). @online{ADAartistprofile, author = {Archive of Digital Art (ADA)}, title = {Ellen Pearlman - »Noor: A Brain Opera«}, url = {https://digitalartarchive.at/database/general/work/noor-a-brain-opera.html}, urldate = {retrieved 2018-20-07}
Technology
Display
Gallery360 is the CityU School of Creative Media's Immersive 360-degree stereoscopic visualization environment, which has evolved from the groundbreaking AVIE system developed in 2006 at the UNSW iCinema Research Center.
Hardware
EEG Headset
Interface
The technology behind the work was based on a research that Pearlman carried out on BCI (Open source brain computer interface) that monitors between eight and sixteen different locations in the brain, the EEG headset can be printed out using a Makerbot 3D portage printing device and comes with special open-source monitoring software.
Software
EMOTIV’s devices convert brain waves into digital signals that can be used to control anything that speaks in 1’s and 0’s. It was used to translate the performer's brainwaves into databanks of audio, video and text that co-responded with the different emotional states of the performer.
Descriptions & Essays
ADA Editor 02-07-2018
Noor: A Brain Opera, Ellen Pearlman’s latest installation, is a 360 degree fully immersive, neurologically driven performance that took place on May 18, 2016, ISEA 2016 Hong Kong international society for electronic art. An EEG (electroencephalogram brain waves) wireless headset triggered video, a sonic environment and a libretto through brainwaves and interaction with audience.
Noor: A Brain Opera connected five databanks to five screens that were primarily triggered by four different emotional states of the performer: relaxation, engagement, interest and stress and the fifth screen displayed the actor's live-time brainwaves. The four emotional states were expressed by colorful bubbles, each color representing a state; red for stress, pink for interest, yellow for engagement and turquoise for relaxation.
Through the use of BCI technology, where consciousness and computers are connected. Noor: A Brain Opera expresses it in a dystopian vision addressing issues of surveillance by asking " Is there a place in human consciousness where surveillance cannot go?"
Furthermore, the audience’s emotional state triggered the performer’s state, just by observing her while she moved through them and according to their responses and emotional states, her’s were triggered and displayed on the five different screens.

Narrative: The libretto is a prerecorded narration done by Pearlman herself, is the story of Noor Inayat Khan, a Russian born, European raised Sufi Muslim Princess whose father Hazrat Inayat Khan brought Sufism to the West. During WWII Noor became a covert wireless operator for British Intelligence by parachuting deep inside occupied Vichy ruled France. For a period of three months Noor was the only communications link transmitting critical information back to the Allies. Caught by the Gestapo, who were unable to break her to find out any information about her transmission cell, Noor was shot inside the infamous Dachau prison shortly before the end of the war. Noor was used as metaphor to work with issues of surveillance, privacy and faith.
ADA Editor: Noor: A Brain Opera, 02-07-2018, in: Archive of Digital Art
Literature
Ellen Pearlman. »The brain as a site specific performative space.« https://tandfonline.com/doi/full/10.1080/14794713.2015.1084810.
Exhibitions & Events
2016
Exhibition :
»ISEA 2016 Hong Kong International Symposium on Electronic Art«
ISEA International