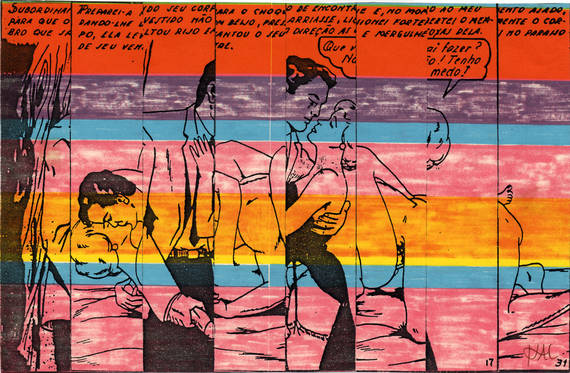 After the conclusion in 1982 of his performance project, Kac decided to focus on simultaneous experimentation with multiple media. The works he produced at that time, between 1982 and 1984, show a relentless desire to explore art forms that can be reproduced and inserted in a mass media context. This interest led Kac to work with photography, public installations, graffiti, rubber stamps, books, photocopies, visual texts, electronic signboards, and, ultimately, holography.

In 1983 Kac published Escracho, an artist's book that showcased many of his mixed media works and which also included contributions from other artists and writers.

In 1984, Kac was invited by critic and curator Marcus de Lontra Costa to participate in the exhibition "Como Vai Você, Geração 80? (How Are You, '80s Generation?)." The exhibition took place at School of Visual Arts of Parque Lage, Rio de Janeiro. This exhibition was the most important group show of the decade in Brazil, as it introduced the youngest generation of artists nationally. Among the artists represented in the show were Daniel Senise, Eduardo Kac, Beatriz Milhazes, Jorge Guinle, Ricardo Basbaum, Frida Baranek, and Leonilson.

While most of the participants were primarily interested in painting, Kac was working with multiples, mixed media, and holography. In that exhibition, he showed a large billboard installation, produced with rubber stamps, which faced inwards. For more information, see the catalogue "Como Vai Você, Geração 80?", special issue of Módulo, July/August, 1984, Avenir Editora, Rio de Janeiro.

The images reproduced below document the work Eduardo Kac produced between 1982 and 1984. Most of these photographs were taken by Brazilian photographer and videomaker Belisario Franca.
Eduardo Kac: Mixed Media (1982 - 1984), 25-05-2022, in: Archive of Digital Art
Literature
Various. »"Como Vai Você, Geração 80?".« Módulo , no. Special Issue (July/August 1984).