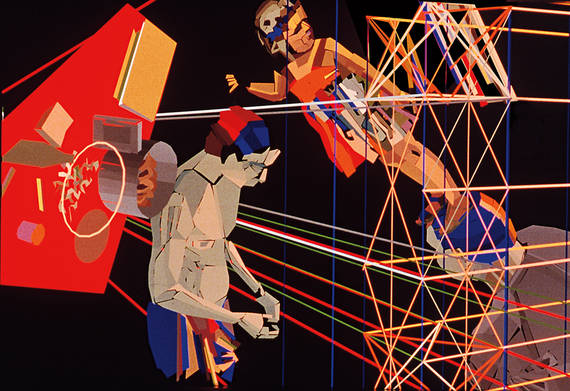 Metalogue was titled after interdisciplinary anthropologist Gregory Bateson's name for his didactic-allegorical conversations called ‘Metalogues.’ The artist was thinking specifically about one called "Daddy, why do things get in a muddle?". The notion of the metalogue is that the structure of a dialogue, can in fact progressively mirror its own content - thus the two way conversation can also be apprehended as a metalogue.

Looking at the picture: the 'muddle' is evoked with the curious Surrealistic jumble of elements arrayed against a jet-black void. On the left is an "anti-gravity" table suspended in the air replete with a still-life arrangement.

On the right is a little girl standing on (her) daddy's head. This being obscured slightly by a rectangular edge-vector ‘tower’. Acevedo has indicated that the tower was not originally intended to be a stand-alone feature but was a reference to the possibility of the scene being enveloped by a triangulated cubic lattice built from the intersection of the converging and visible perspectival vectors. The top rectangular cell being inscribed by two interpenetrating vector tetrahedra. This is the same structural device the artist used for his 1983 drawing called Void Matrix Moment.

Just left of center in the composition, is a young man (also seen in the Ectoplasmic Kitchen series) frozen in a quizzical-eye-squinted 'praying - mantis' stance. Perhaps he's the perplexed audience-of-one to this dialectic in a muddle.