»Making of Eve Clone Documentation I/1-10 Head and Hands« 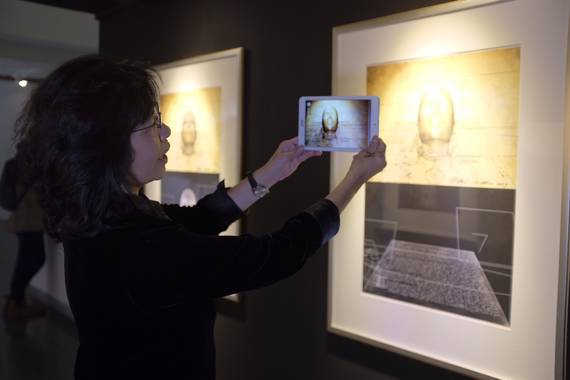 Cite
X
Archive of Digital Art (ADA). “Lin Pey-Chwen - »Making of Eve Clone Documentation I/1-10 Head and Hands«”. https://digitalartarchive.at/database/general/work/making-of-eve-clone-documentation-i1-10-head-and-hands-1.html (retrieved 2021-18-10). @online{ADAartistprofile, author = {Archive of Digital Art (ADA)}, title = {Lin Pey-Chwen - »Making of Eve Clone Documentation I/1-10 Head and Hands«}, url = {https://digitalartarchive.at/database/general/work/making-of-eve-clone-documentation-i1-10-head-and-hands-1.html}, urldate = {retrieved 2021-18-10}
Technology
Display
Media: Digital Prints, Hand Drawing, 3D Animation, Augmented Reality Installation, tablet computer
Size: 54 x 72 x 3cm x 10 pcs
Descriptions & Essays
pey-Chwen Lin 23-09-2021
For Making of Eve Clone Documentation I series, I overlap both head and hand part of Leonardo Da Vinci’s manuscript with the line sketch and grid of Eve Clone’s head and hand part in order to accentuating the golden ratio of Eve Clone. Although Leonardo Da Vinci’s manuscript use male as model, the face ratio of Eve Clone is still highly similar with his manuscript keeping signs of computer software which I design that in purpose as contrast of digital file and manuscript document. In the last print of both head and hand, the upper document shows the metallic-colored forming head and right hand with “666 Mark of the Beast” of Eve Clone, and the lower part shows the chapter Daniel and Revelations of Bible in the mirror writing from Leonardo da Vinci.

The final touch is AR techniques that transform Eve Clone from a static print into dynamic video to simulate a vivid Eve Clone interacting with audiences in real world. When the viewers used AR installation to interact with the 2D documents of Eve Clone’s head and hands, they were surprised to find that the 2D head and hands moved on the screen. Eve Clone’s head gradually changed from asleep, facing up, to rising with open eyes and turning left and right, before closing the eyes and returning to the original posture. The hands moved in a tempting gesture of the number 6, and like Satan’s horns indicating that Eve Clone lived in the same time and space as humans. Finally, I added the golden lines and number symbols such as 666, 721, 144, 1213, 924 , recorded in the Bible, at the tops of the prints by hand drawing them.
pey-Chwen Lin: Making of Eve Clone Documentation I/1-10 Head and Hands, 23-09-2021, in: Archive of Digital Art
Literature