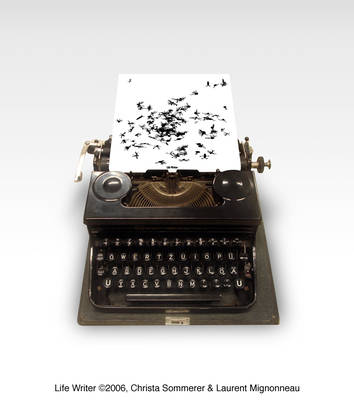 Life Writer consits of an old-style type writer that evokes the area of analogue text processing. In addition a normal piece of paper is used as projection screen and the position of the projection is always matched with the position of the type writer roll. When users type text into the keys of the type writer, the resulting letters appear as projected characters on the normal paper. When users then push the carriage return, the letters on screen transform into small black and white artificial life creatures that appear to float on the paper of the type writer itself. The creatures are based on genetic algorithms where text is used as the genetic code that determines the behaviour and movements of the creatures. The algorithms were developed for one of our previpus works called Life Spacies [2] and here the text functions as genetic code for the creation of artifical life creatures.

As in the Life Spacies system the artificial creatures created by the act of typing can be faster or slower depending on their genetic code and body shape. All of the artificial life creatures also need to eat text in order to stay alive and when users type a new text the creatures will quickly try to snap up these characters from the paper in order to get energy. Once creatures have eaten enough text they can also reproduce and have off-spring so eventuelly the screen can become very full when creatures a fed well.