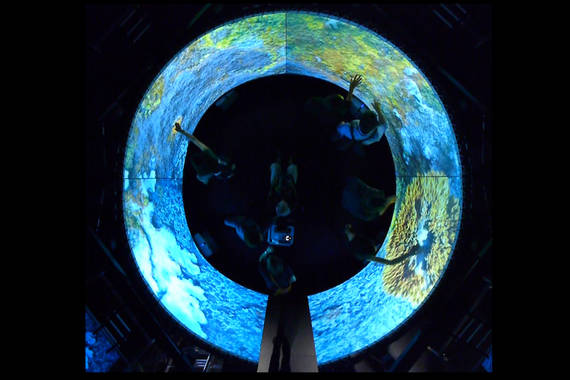 Created for and during an artist in residence at the Immersive Lab (IL). The IL is a space developed Daniel Bisig and Jan C. Schacher at the ICST Institute for Computer Music and Sound Technology, Zurich University of the Arts (ZhdK)
https://tube.switch.ch/videos/b561415b

- Touch Sensors. The touch screen sensors at the IL consist of a tracking system composed by four infrared cameras behind the screens operated by a camera-based system (OpenCV in OpenFrameworks), which surveys the whole panoramic screen (Schacher & Bisig, 2017, p. 247).
Software
MAX
Sound
16 audio channels and 2 subwoofers
Descriptions & Essays
Claudia Robles-Angel 12-09-2021
Inspired by the composite plant of lichen (from Greek: leikhen), which is the result of a hybrid partnership between a fungus and an alga. The installation is therefore a reflection upon the interaction and mutualistic relationship between two organisms, and how this union impacts on their behaviours inside a created audiovisual immersive space.

The installation consists basically of two types of participants: the central figure or host, sitting in the middle of the panoramic video space, whose brainwaves’ values are collected via a BCI interface in order to influence the sonic environment; the second type of participant is represented by the guest(s), visitors who, by touching the screens, influence the host’s emotional states through to the tactile transducers that are attached to the chair where the host is seated and consequently, also the audiovisual environment.
Claudia Robles-Angel: LEIKHEN, 12-09-2021, in: Archive of Digital Art
Literature
Exhibitions & Events
2019
Conferences:
»ISEA 2019: Lux Aeterna«
ISEA International1
2018
Others:
»Immersive Lab - LEIKHEN«
ZHdK