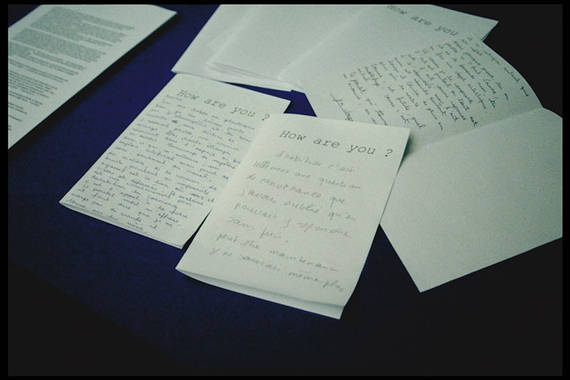 
Cite
X
Archive of Digital Art (ADA). “Olga Kisseleva - »How are you?«”. https://digitalartarchive.at/database/general/work/how-are-you.html (retrieved 2015-02-11). @online{ADAartistprofile, author = {Archive of Digital Art (ADA)}, title = {Olga Kisseleva - »How are you?«}, url = {https://digitalartarchive.at/database/general/work/how-are-you.html}, urldate = {retrieved 2015-02-11}
Technology
Descriptions & Essays
Olga Kisseleva 02-11-2015
“How are you?” is a question that seems so simple as it is understood in the West, since it is no more than an introduction to language or a sign of recognition. We do not really answer. In Russia, you do not ask the question unless you want a full detailed response. The original project in 1998 was only on Internet. An incongruous answer came from Yugoslavia on Christmas Eve: ‘I’m afraid the NATO bomb attack!’ We know what happened there next… This event determined the current project “How are you?” It is a video of responses filmed in three distinct places: The 48th Venice Biennale, the Tashilhumpo Monastery in Tibet and Silicon Valley in California. The answers reveal the extent to which places condition the people met, from the blasé contemporary art critic at the Venice Biennale to the radiant Buddhist monk in oppressed Tibet to the extremely frustrated young executives in Silicon Valley, who interpret this simple question as an attack.
Olga Kisseleva: How are you?, 02-11-2015, in: Archive of Digital Art
Literature
Exhibitions & Events
2010
Others:
»Divers Faits«
Josza Gallery
2007
Exhibition :
»FOOTNOTES on Geopolitics, Market and Amnesia. 2nd Moscow Biennale«
Moscow Biennale
2001
Exhibition :
»How are you?«
KIASMA
1999
Exhibition :
»dAPERTutto (APERTO over ALL)«
Venice Biennale
1999
Exhibition :
»ZAC«
l'ARC - Modern Art Museum
1998
Exhibition :
»How are you?«
FRAC Languedoc Roussillon