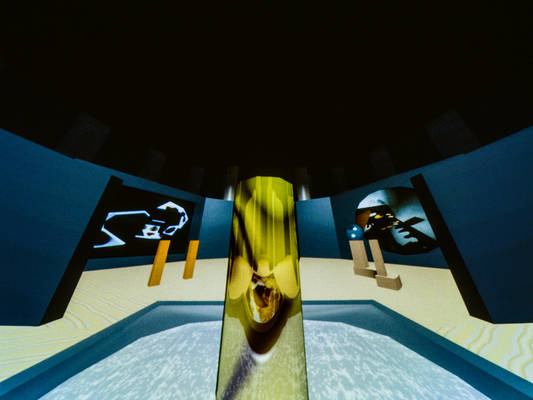 Cite
X
Archive of Digital Art (ADA). “Jeffrey Shaw - »Heavens Gate - Anamorphic«”. https://digitalartarchive.at/database/general/work/heavens-gate-anamorphic-version.html?tx_vawiz_pi1%5Baid%5D=qyqqgugbj&cHash=33df27f645294275bbb231d39da4d17f (retrieved 2016-10-06). @online{ADAartistprofile, author = {Archive of Digital Art (ADA)}, title = {Jeffrey Shaw - »Heavens Gate - Anamorphic«}, url = {https://digitalartarchive.at/database/general/work/heavens-gate-anamorphic-version.html?tx_vawiz_pi1%5Baid%5D=qyqqgugbj&cHash=33df27f645294275bbb231d39da4d17f}, urldate = {retrieved 2016-10-06}
Technology
Method
Post-processing
Descriptions & Essays
This version of Heavens Gate uses the original video material of this work, but presents it in a somewhat different viewing situation. By means of digital post-processing this video material has been anamorphically deformed, and is projected onto a screen in the center of which there is a large mirror surfaced cylinder. Reflected on this cylindrical mirror, the anamorphic distortion of the projected image is optically corrected, so as to present a coherent virtual representation of the original material to the viewer. The recurrent references to Baroque ceiling paintings in Heavens Gate, with their tromp l'oeil perspectival manipulations of form and space, is hereby extended by a further level of optical illusionism. At the same time this strategy of representation engages itself to the contemporary technologies of image virtualisation.
Felix Bathon 19-08-2015
"Heavens Gate as a video installation was first shown in the neoclassical stairwell of Felix Meritis. In other exhibition spaces the work usually occupies a specially constructed completely dark room. The video image is projected over the whole ceiling, and the floor is entirely covered by a mirror on which the visitors stand and see both their own reflection and the reflection of the projected image on the ceiling. The otherwise total darkness of the space creates for the viewers a state of visual suspension between these two image planes.

The conceptual and iconographic references in this work are largely derived from Baroque ceiling paintings and aerial/satellite pictures of the surface of The earth. These images alternate in a computer-processed videographic morphology that deconstructs and manipulates the constituent pixels of the original images and then anamorphically reconfigures them in a virtual three-dimensional space. This digital tromp l'oeil characterises the awesome contemporary view down from space which inverts the ecstatic Baroque gaze up to the heavens. Further iconographic references in this work conjoin these viewing extremities - the Futurist embrace of the aerial point of view and the spatial apotheoses of El Greco, William Blake and Piero Manzoni, amongst others.

The presentation of this work at the various exhibition sites was each time addapted to the site architecture. In some cases this ment that the work was shown inside a specially constructed black box - but wherever possible the work was integrated into and made use of the building architecture. For instance at Felix Meritis the work was installed in the opening of a tall circular stairwell, while in the Museum Ettlingen it exploited the existing baroque decor."
[Jeffrey Shaw http://www.jeffrey-shaw.net/html_main/show_work.php?record_id=75#; 19.082015]
Felix Bathon: Heavens Gate - Anamorphic, 19-08-2015, in: Archive of Digital Art
Literature
Exhibitions & Events
1995
Exhibition :
»Arslab 2: I Sensi del Virtuale«
Arslab
1993
Festival :
»Intercommunication 93«
ICC (Intercommunication Center)