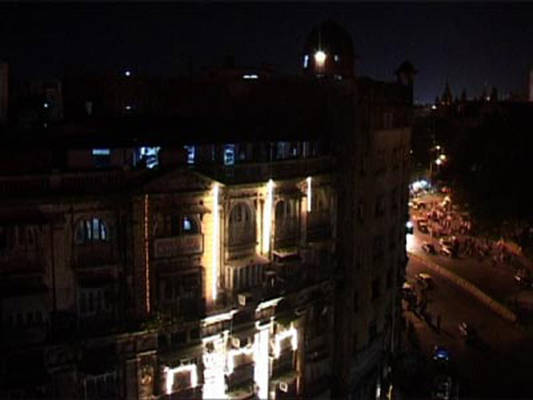 It was commissioned for the Mumbai Festival 2005 with support from the Jindal South-West Foundation.

Additional thanks are due to :

Cite
X
Archive of Digital Art (ADA). “Ashok Sukumaran - »Glow Positioning System«”. https://digitalartarchive.at/database/general/work/glow-positioning-system.html (retrieved 2010-06-10). @online{ADAartistprofile, author = {Archive of Digital Art (ADA)}, title = {Ashok Sukumaran - »Glow Positioning System«}, url = {https://digitalartarchive.at/database/general/work/glow-positioning-system.html}, urldate = {retrieved 2010-06-10}
Technology
Installation Requirements / Space
echnical notes:
The installation was running off a MAX program on a mac mini (stored in the crank base). The patch (for a two-crank version) is here. You will need to install bluesense and lcudp (lanbox) externals. The cranks use rotary encoders from Blue Melon. The DMX controller is a Lanbox-LCE.
Descriptions & Essays
There are many ways to "locate" a city, and oneself within it. One way is to distance oneself from it - to look it up in an atlas, a picture, or to go out to sea or up a hill to watch the twinkling lights, and point out the sights we know. Another way is to move within the streets themselves; to awaken the more proximate senses, to touch the city itself. The historical space across these two extremes is richly populated: with maps, movies, mondo nuovo, grids and drifts, 'oramas and 'oscopes, travelling shots and shooting travellers. In recent times, GPS (Global Positioning Systems) have allowed for an unprecedented notion of "location", or the connection between the mover and the map. GPS devices tell us where we are at all times, potentially everywhere on the globe. Implying that we will travel, globally. In Glow Positioning System, a different kind of travel takes place. This is an interior voyage, a circular tourism... of a place many of us (the audience)know. A 1200-foot ring of lights encircles the General Post Office intersection in Fort, Mumbai. This is a triangular chowk that is a quieter, somewhat neglected cousin of its neighbour the old VT station. In the center of the intersection is an old pyaav or drinking fountain, and a pigeon-feeding area- the kabutarkhana. Lights patterns travel between buildings, across roads and onto trees and lampposts, forming an image-scape that is starkly visible at night. A hand-crank mounted on the pavement provides a way for the audience to "scroll" this landscape. The ring responds to panoramic desire, the age-old search for an image to immerse our selves in. From Cycloramas to VR (via panoramic traditions in painting and photography), the "surround view " is a familiar presence in both urban and cinematic manifestoes. Of course, here the city surrounds us already. We just connect some dots, and look again. This work evolved as a large collaboration between various neighbourhood agencies, extending the orginal permissions to do a lighting work at the GPO. The different types of lights (mainly cheap "chinese" string lights) were installed on the facades and rooftops of several homes , a real-estate office, a razor-blade manufacturer, a transit lodge, an abandoned bank, several shops and restaurants (see map), as well as the 150-year old 'heritage' structure, the General Post Office. Occasionally, existing interior or exterior lights were also connected to the dimming system. The principal, lighting decorator/ installer was from the neighbourhood, momentarily distracted from his wedding-decoration business. The lights were installed often by negotiating convenient locations and shapes in-situ, and their form was largely determined by the decorators and residents themselves. As you turn the crank, the lit part of the ring of lights moves, for example from the Kothari building onto the trees, or from one minaret to the next. Changing the speed of rotation causes variable persistence effects, both actual and perceived. A path of movement is thus traced upon the concrete city, and our heads turn to meet it. This crank mechanism itself refers to not only its specific history in the moving panorama, but also a general history of the moving image: as a driver for cinema. Like cinema, the experience does not depend on the observer being physically displaced. You are clearly not going anywhere. Yet there is the clear sense of a physical landscape, and the promise of a haptic journey.
Literature
Sukumaran, Ashok. »Introductory Essay from a CAMP Event : On the Excess of Images, and of Access to Images.« .
Sukuraman, Ashok. »A Critical Review of Rafael Lozano-Hemmer's Work in Venice.« .
Sukuraman, Ashok. »Selection from an Interview with Ashok Sukuraman.« In Cinema of Prayoga, edited by Karen Mirza and Brad Butler. London, UK: no.w.here, 2006.
Exhibitions & Events
2006
Festival :
»Ars Electronica 2006: Simplicity, Brucknerhaus«
Ars Electronica Linz GmbH & Co KG
2006
Conferences:
»ISEA 2006 [The Thirteenth International Symposium on Electronic Art]«
ISEA International
2006
Festival :
»Singapore Biennale 2006«
Singapore Biennale