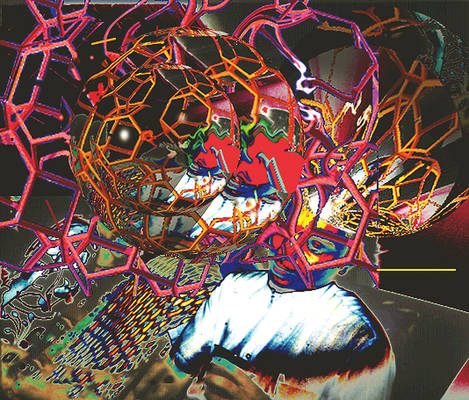 Victor: I got a whimsical satisfaction in naming this picture and its variants after a day that never existed. You see, 1993 was not a leap year. There was no 29th day that year. The source photograph was taken at a Sunset Blvd art opening, that I attended in 1985. I recall that it was at the Ocaso Gallery. It was a group show of paintings which included works by Mark Gash. Among others in attendance were Kraig Grady, Anthony Ausgang, Melissa Mayo and Pierre Picot.

The image is basically a self-portrait of yours truly having a crown chakra explosion and a momentary past life regression. It was created in my West Hollywood apartment on Vista Street. It combines geometry from 1988-89 produced on an IBM PC with final image processing and editing done on a Macintosh IIci in 1993.

Like two frames in an animated sequence this is the same scene as in v1 but a few seconds later as the chakra explosion continues and the regression echo starts to feedback, bifurcate, and stabilize. In October 1993, this version was reproduced on the cover of PIXEL, a well known Japanese computer graphics magazine.