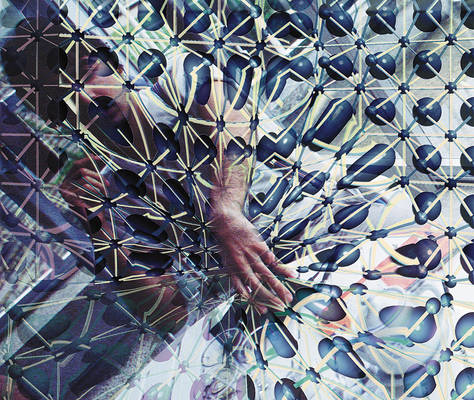 This is a portrait of Acevedo's younger brother Eric adapted from a photograph taken in Northern, Spain (Galicia) in 1983. Consistent with my ongoing exploration of the use of the isotropic vector matrix (IVM) to metaphor the underlying void-plenum, this image illustrates the interconnectedness of figure-ground and the resultant perturbations in the otherwise isotropic field.

This is a sequel to the Acevedo image called David in Orense. Later Victor realized that he had been mistaken as to the real location where the source photos for the two images were taken. They were in fact taken in Ribadeo which is a municipality in the North Western Spanish province of Lugo in Galicia. Specifically the scene photographed was afternoon tea in an airy in-door patio at a lovely hotel called Parador de Ribadeo.

Victor: Yes, it’s true, this photo was actually taken in Ribadeo. Decades later, reminicing and doing research online with Google images, my memory was jogged. A few days later we did arrive in Orense. We were following the trail of the early Acevedo family in Spain. The phonetic poetry of the name ‘Orense’ for me more accurately captures the aura and resonance of the journey. So with a bit of artistic license, I kept the name in both titles.
Victor Acevedo: Eric in Orense v02, 23-01-2022, in: Archive of Digital Art
Literature
Frank, Peter and Charlotte Frost and Thomas Miller and Michael J. Masucci and Victor Acevedo. Acevedo in Context: Analog Media 1977-1987 • Digital Media 1983 - 2020. 1st th ed.Los Angeles, CA. USA: Acevedomedia, 2022.
Walker, James. Silent Motion - catalogue for the exhibition, 2001 ISBN 0-9536240-2-1. Vol.1. 1 th ed.London, UK: Colville Place Gallery Publishing, 2001.
Exhibitions & Events
2001
Exhibition :
»Silent Motion«
Colville Place Gallery