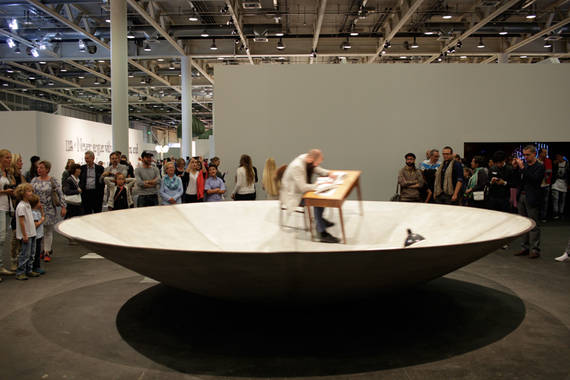 Cite
X
Archive of Digital Art (ADA). “Julius von Bismarck - »Egocentric System«”. https://digitalartarchive.at/database/general/work/egocentric-system.html (retrieved 2016-09-02). @online{ADAartistprofile, author = {Archive of Digital Art (ADA)}, title = {Julius von Bismarck - »Egocentric System«}, url = {https://digitalartarchive.at/database/general/work/egocentric-system.html}, urldate = {retrieved 2016-09-02}
Technology
Descriptions & Essays
DA Editor 09-02-2016
In a public exhibition space (Art Basel Unlimited), von Bismarck spent a week on a paraboloid-shaped cement disc, which rotated around its own axis at a speed of fifteen revolutions per minute. He slept, ate, read, and talked on the telephone while on the platform. Viewers were able to see him clearly, although he was only able to perceive the external world as a blurred mass of people, whose voices merged in an incomprehensible murmur.
In this work, the artist serves as the object of an experiment, testing the perceptual and psychological effects of a rotating system in which the force of gravitation is distorted by centrifugal force. The objects on the platform do not have fixed locations, but rather orbits in which they circle. Yet von Bismarck’s body seems to be standing still, as the hub of a cosmos spinning around him. He is the center.
The cement platform describes a paraboloid, which has been engineered in terms of shape, so that the combined centrifugal and gravitational forces are always exerted at a ninety-degree angle to the surface. The sculpture was created in cooperation with structural engineer Norbert Enneking, who developed a unique sand formwork process combined with a sandwich construction that uses textile-reinforced ultra-high performance concrete. Conceived specifically for the object, this technique enables the production of thin, lightweight wood- cement shuttering formwork elements.
Source:http://juliusvonbismarck.com/bank/index.php?/projects/egocentric-system/
DA Editor: Egocentric System, 09-02-2016, in: Archive of Digital Art
Literature
Exhibitions & Events