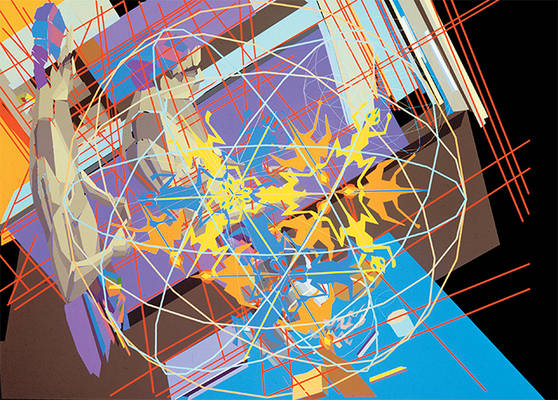 Ectoplasmic Kitchen v1 from 1987 was Acevedo’s first important digital art image. It is the most well-known iteration of its subject as singled out from the entire Ectoplasmic Kitchen series. Although, numbered as v1 (for version 1) It is not the first version he produced but it emerged over time as he became more skilled with the software while exploring various combinations of the pictorial elements that might comprise the image. An archival print of the image was initially issued as a 16”x20” Cibachrome. It was created with Artworks software by West End Film on an IBM PC (AT) running DOS (Disk Operating System). Acevedo’s earliest public showings of his new digital work usually included Ectoplasmic Kitchen versions 1 or 2.
?
Victor: What I consider my first successful computer graphic image is Ectoplasmic Kitchen v1. For me it’s the definitive version in the set of many variants based on a photograph I took using 35mm slide film in 1983. Combining influences from both Escher and Fuller, it combines Escher-inspired open-packed zoomorphics enclosed in a Synergetic great-circle spherical domain. The Escher-like creatures are arrayed symmetrically around 3-fold roto-centers and emerge from an underlying triangular and hexagonal grid. It is significant that using computers to make images in the summer of 1987 rekindled my fondness for zoomorphic tessellation. The software’s ability to easily replicate forms and perform symmetry operations such as rotation and translation made repeating patterns quite a natural thing to do. I believe that Escher’s work in many ways prefigures the advent of digital art. Conceptually, I continued to graphically employ polyhedral nets that interpenetrate my figurative subjects, persevering with the metaphor born of my 1977 Escher- inspired Satori at the Alhambra, in Granada, Spain.

In this 1990 description of Ectoplasmic Kitchen, Acevedo uses language which is no doubt, informed by his readings in contemporary metaphysics and R. Buckminster Fuller’s Synergetics: Explorations in the Geometry of Thinking.

The protagonist watches himself in this picture of an out-of-body experience. This image being a metaphysical genre snapshot. We see a person inside a great-circle spheric attention-span bubble crystallized in sympathetic resonance. A consciousness embodied, he is tuned to a psychically charged considerable set. The open-packed M.C. Escher like zoomorphics are arrayed symmetrically about double 3-fold roto-centers. The creatures emerge from an underlying triangular and hexagonal grid. They signify brahman-transducer prana envelopes in the guise of three icons in replication – that is, a chicken, lizard and newt. The red lines are highlighted furniture and table-object edge-vector perspectival trajectories converging toward various implied vanishing points.

Ectoplasmic Kitchen v1 has been reproduced many times, most notably in the Leonardo (print) Journal, Vol. 33, No. 1, February 2000 and in Homage to Escher their online gallery exhibition curated by Michele Emmer. It was also reproduced in the book called Escher’s Legacy: A Centennial Celebration, edited by Doris Schattschneider and Michele Emmer, 2002. In September 1989 it was included in a Verbum exhibition called IMAGINE Tokyo, curated by Michael Gosney. Ectoplasmic Kitchen v2 is the same image without the zoomorphic patterns. It emphasizes the great circle spherical domain as well as the two figures.