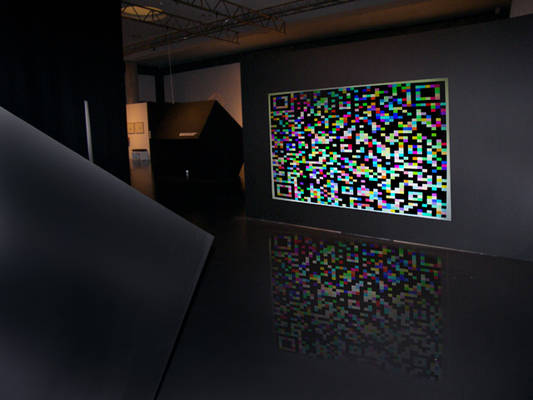 >>with the support of

interactive program, in situ installation for mobil phones
Descriptions & Essays
For me, as an artist working with software CONSPIRE is first about encoding. As an ex-soviet, I perceive CONSPIRE in the same time like a dissident’s practice (an other way of encoding!) and like a monitoring following by manipulation – all kind of secret service’s practice. Because of my ex-soviet origin, I’m extremely impressed with the Berlin’s House of World Cultures. A lot of messages are encoded in this building. American architects and manufacturers consciously encoded some of them. Some others are still present as a trace of bi-dimensional world during the cold war period. They were not consciously formulated by the building’s authors, but I can read all of them, because they are exactly the same, we used to have the other side of our iron curtain. My proposition for CONSPIRE consists to decode in real time the buildings “propaganda”. CROSSWORLDS installation helps visitors to translate in real time the subliminal information in textual form. I place electronic tags detectable with simple mobile phone in different parts of the building. The ensemble of tags contains the collection of the more spectacular messages hidden in the building’s architecture. The visitor crosses the show like a labyrinth, while seeking for tags. When he’s decoding tag’s messages, I place him into an ironical “dominant” position. He’s exhibited himself like manipulating people in the exhibition space with his “remote control”. But what kind of messages are encoded into the very impressive architecture of HKW building ? It seems to be, first of all, a message of propaganda of American style of life. This message was stimulatingly formulated by different ways. The most popular one was to deliver it through the Hollywood movie’s industry: “What the people believe is true“. One of the most popular slogans of Soviet propaganda in the same period was “The dreams of the people came true“ – a way to explain to Soviet people that they already got the materialization of the “Hollywood dream”, and that “Each day we live happier!” Susan Buck-Morss gives a detailed analysis of the similitude between Soviet and American propaganda since the twenties to the end of Cold War. I’ve built a particular protocol to realize my work for/about HKW. I’ve selected some of the most popular pictures from the American and Soviet propaganda. I’ve taken seven American and seven Soviet slogans. I’ve encoded each slogan as an electronic tag composed with two pictures – one Soviet and one American. Each tag has a black part and a white part, it can be decoded tanks to this contrast. The slogans are also composed with threats and promises. In each tag one of two slogans represents it’s black part, another one – the white part. >>with the support of FORMICA interactive installation in collaboration avec Sylvain Reynal >>shows Transmediale_Conspire, HKW, Berlin, Germany, curator Natasa Petresin, 2008 >>more El Pais, Madrid, Spain, January 31 2008, Stefano Caldano, "Teorías (artísticas) de la conspiración", (pdf)/spanish/
Literature
Moscow Museum of Modern Art, ed. The History of Gender and Art in Post-Soviet Space. Moscow: MMOMA, 2010.
Groys Boris and Degot Ekaterina and Riff David and Costinas Cosmin. Shockworkers of the Mobile Image - Catalog. Ekaterinburg: 1st Ural Industrial Biennial of Contemporary Art, 2010.
Kisseleva, Olga and Oliver Grau. »Theory and Practice of Media Art: Aesthetic Parergons and Perspectives.« In First Post Industrial Contemporary Art Biennale, edited by NCCA. Ekaterinburg: NCCA, 2010.
Kisseleva, Olga. Indomitable Women. Barcelona, ES: Video Art World, 2010.
Zhukova, Daria and Herve Mikaeloff and Dimitri et. al. Ozerkov. Futurologia. Moscow, Russia: CCC Garage, 2010.
Kisseleva, Olga, ed. Divers fait. Paris: Jannink Editions, 2010.
Kisseleva, Olga. »Still Life as a Dictionary.« In Conference at Art Bruxelles, edited by . Brussels: 2010.
Kisseleva, Olga. INTER-ESSAI: Oeuvre en dialogue. Saarbrücken: Editions Universitaires Europeenes, 2010.
Kisseleva, Olga and Elena Sorakina and Natasa Petresin-Bachelez. »Communism´s Afterlives: Part II.« In Proceedings of the Conference Communism's Afterlife, edited by . Brussels: The Public School, 2010.
Kisseleva, Olga. »To be here and there: General Relativity and Quantum Physics.« In PLASTK Art and Science 1, Université Paris 1, Panthéon-Sorbonne, edited by Olga Kisseleva. Paris: Université de Paris I, Panthéon-Sorbonne, 2010.
Exhibitions & Events
2010
Exhibition :
»It might never happen, curated by Christian Debize, opening program of the Centre Pompidou Metz, Metz, France«
Centre Georges Pompidou
2010
Exhibition :
»No soul for sale, curated by Cecilia Alemani, Massimiliano Gioni and Maurizio Cattelan«
Tate Modern
2009
Exhibition :
»Pandora's Box, Fundación Joan Miró, Barcelona, Spain, «
Fundacio Joan Miro
2007
Exhibition :
»FOOTNOTES on Geopolitics, Market and Amnesia«
Moscow Biennale
2007
Exhibition :
»documenta 12«
documenta und Museum Fridericianum Veranstaltungs-GmbH
2007
Exhibition :
»Invisible Sounds, Netherlands Media Art Institut, Amsterdam, Holland, curator Annet Dekker «
Netherlands Media Art Institute NIMK
2006
Exhibition :
»Nuit Blanches«
Nuit Blanches
2001
Festival :
»7. International Istanbul Biennial«
Istanbul Foundation for Culture and Arts