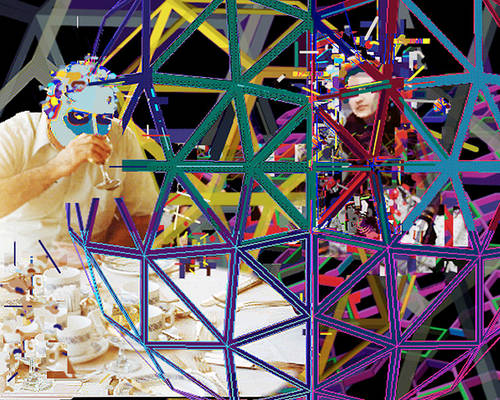 6.26-27.86 is named after the approximate date that Victor’s older brother David Acevedo passed away. The exact time not known. It was very late on the 26th or very early on the 27th of June 1986.? Version 2 of this image was printed in black and white on the cover of the YLEM newsletter, Vol. 14 No.8 August 1994. This was initially created with the PC-based Targa paint system (TIPS). The 3D geometry was rendered with the Cubicomp. Later parts of the image were modified on a Mac with Photoshop 2.5 – for instance the quasi-cubist deconstruction and re-assembly of the still life in the lower left corner.?

Victor: This was around the time that I switched over to the Mac. The young woman in the picture always reminded me of a blind-folded Mona-Lisa. It also referenced those funny old-fashion adult magazines that had tape over the people's eyes to hide their identity. Later versions of this woman were rendered in a kind of neo-cubist manner. One of the underlying metaphors that ran through many of my images from this period was the juxtaposition of neutral geometrical form (polyhedra) with interpretive subjective psychologies rendered with a vocabulary of neo-abstract expressionism by way of digital mark making. Come to think of it, apart from the digital aspect, this conceptual synthesis was already in play for me many years ago, when I was still working with oil paint and graphite.