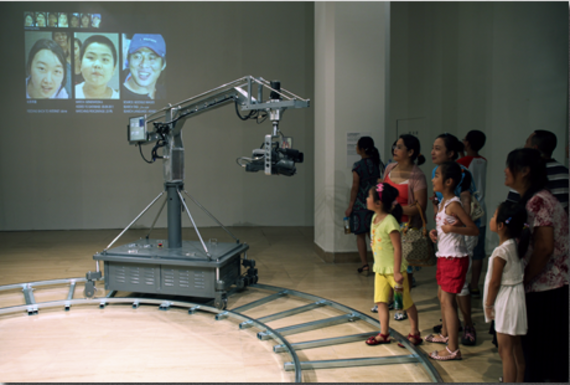 Like Physiognomic Scrutinizer (2008 – 2009) and Mirror_Piece (2010 – 2011), 15 Minutes of Biometric Fame also incorporates face-recognition software employed in surveillance and security applications. In contrast, the design draws inspiration from camera dollies utilised in television and cinematography.

A circular track is fitted with a camera crane mounted with an independently operated camera. The camera lens imposes on public space, seeking out and scanning the visitor’s facial features. Rather than identifying a person, the biometric video analysis software assists in comparing their characteristics with a preselected data base of “celebrity” faces.

Attached to the camera, an LCD monitor displays this matching process and those visitors who can be partnered as lookalikes to a data base celebrity are then projected on a large public screen. Not only are they similarly tagged but they are further identifiable with a generation label. A direct match with an original celebrity earns a 2nd generation tag. It follows that a comparison with subsequent generation levels moves you further down the lineage. This "ancestry of fame" is also displayed in its entirety.

Once a visitor is captured, matched and tagged, they are subsequently added to the continually expanding data base, uploaded to the internet and hence promoted to instant stardom. In this way, 15 Minutes of Biometric Fame is not only critiquing the act of “becoming famous”, but the precursor conditions for celebrity credibility as well.
Marnix de Nijs: 15 Minutes of Biometric Fame, 02-12-2015, in: Archive of Digital Art
Literature
Exhibitions & Events
2012
Festival :
»DEAF 12: The Power of Things«
V2_Lab for the Unstable Media
2011
Exhibition :
»TransLife - Triennial of Media Art«
National Art Museum Of China